You asked: Railroad no longer planning to replace Blackwater bridge 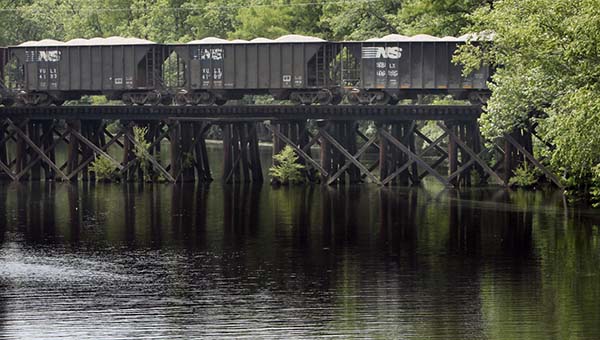 Curious about something in Western Tidewater? Send your question to youasked@tidewaternews.com, and we’ll do our best to find the answer.

You asked: What is going on with the Norfolk Southern Line in Franklin?

FRANKLIN—Norfolk Southern Corp. is no longer planning to replace the bridge over the Blackwater River.

“Due to declining traffic, Norfolk Southern will continue to operate the line through mid-2013 or until major expenditures make it cost-prohibitive,” said Robin Chapman, a spokesman for the Norfolk-based company.

Jeff Turner has difficulty believing the company is even considering abandoning the line. He’s the riverkeeper for the Blackwater/Nottoway Riverkeeper Program.

“It is especially hard to understand after they just spent million of dollars to replace the bridge in Courtland,” he said.

Turner was hoping that Norfolk Southern was going to replace the bridge as well as look into removing supports from previous bridges that are still in the river.

“The pilings are still there from at least two bridges that were there before,” he said.

The bridge looks to be as solid as ever to Turner.

“I was a few hundred feet north of the bridge earlier this week and it didn’t even flex,” Turner said.

“Which is unusual as I usually see it bow.”

The crossing, located north of the Holland-Councill Memorial Bridge, was originally in the company’s five-year plan for replacement by 2012. It was repaired and stabilized in 2009 after a crack was reported in a beam where the rails lay. Following a patrol of the Blackwater, Turner made Norfolk Southern aware of the damaged trestle.

“We are monitoring the condition of the Blackwater River Bridge to assure safe operations of rail traffic,” Chapman said.

Turner would still like to see the old supports, from multiple previous bridges, removed to ease the restricted flow of the Blackwater.

“As you know water goes to the least resistance,” he said. “Those pylons catch any debris that flows down the river acting as a dam and their removal might mitigate some flooding issues for the city.”

Curious about something in Western Tidewater? Send your question to youasked@tidewaternews.com, and we’ll do our best to find the answer.... read more