You asked: Franklin has garbage ordinance, code in place 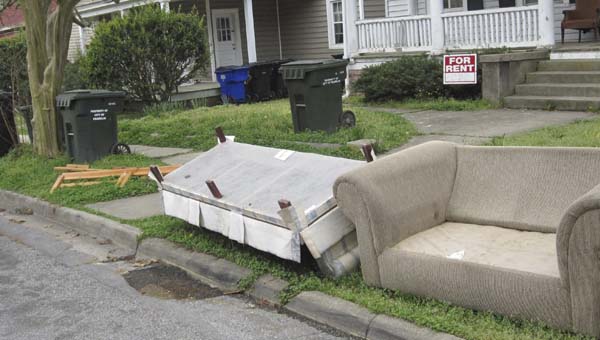 Furniture left out on a city street in Franklin. — SUBMITTED

Curious about something in Western Tidewater? Send your question to youasked@tidewaternews.com, and we’ll do our best to find the answer.

You asked: What’s permitted when it comes to the kind of trash put on the curb?

FRANKLIN—Franklin has a city ordinance and code in place that specifies what type of garbage is picked up by the city and what type is not.

He added the city will pick up stoves, furniture, refrigerators and water heaters, but people must call and request they be picked up.

Pace explained that white goods and bulky items, i.e. washing machines, refrigerators and furniture, can be put out at the curb, but the limit is four items.

“We used to run a route on Wednesdays, but realized that was not very efficient,” he said. “Now, if a customer calls the Public Works office at 562-8564 prior to noon on Tuesday, a truck will be sent to pick up the items.”

He also said the main reason for calling ahead is so he and his staff can plan ahead and have enough manpower to physically lift the items.

“Franklin does not have the right type of truck, called a grapple truck, to pick them up without physically lifting them.”

“People need to tell us what it is we are picking up. This gives administration the time to print out individual work orders so we can look at them and determine how many men we need,” Pace said.

Sometimes he will even send a backhoe out to assist lifting the bulky debris but his office “has to plan ahead.”

When a new homeowner moves to Franklin, the city gives out a list of policies and procedures for garbage and recycling pickup. This information is also available on the city’s website. Go to www.franklinva.com/ and to the right under info links, click on city code. When the box pops up scroll down to Chapter 13, Garbage and Refuse.

During that week the city is lenient about the amount of quantities they will pick up, but the same rules are followed. Amnesty Week is scheduled for April 22-26.

Hazardous items, such as gas, insecticides and oil can also go to the transfer station, which is on Route 671 out near Lee White Trucking.

A violation of the code’s chapter on garbage and refuse does list that violations are punishable by fine of up to $500 (see Sec. 13-2). Pace said residents who think a neighbor is violating the code should contact law enforcement.

“We do have a lot of people who don’t understand the rules and policies, particularly renters,” he said. “I try to stop and tell people what the policies are, but in a lot of instances, folks just don’t really care. It is difficult and we see it every day.”

Pace said if anyone has questions about garbage collection to call him or call the city’s office of community development.

“Call and ask questions,” he stressed. “We are here to serve and we want to make the city look better and our guys are trying to do that every day. We do the best we can.”

You asked: Railroad no longer planning to replace Blackwater bridge

SUBMITTED Curious about something in Western Tidewater? Send your question to youasked@tidewaternews.com, and we’ll do our best to find the... read more