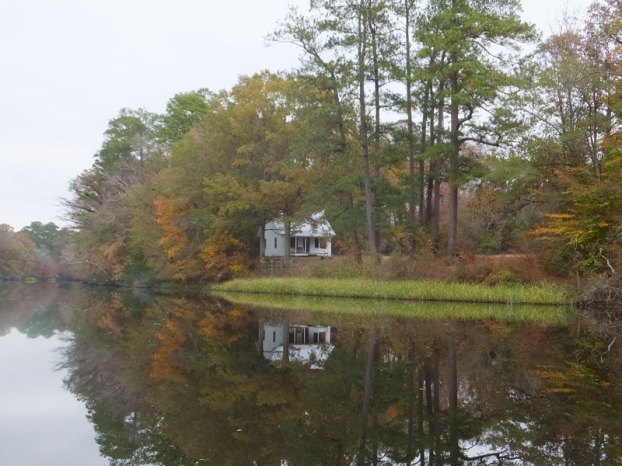 The Old Edwards Sein Beach on the Nottoway, where herring was once pulled was pulled by nets long ago. Submitted | Jeff Turner 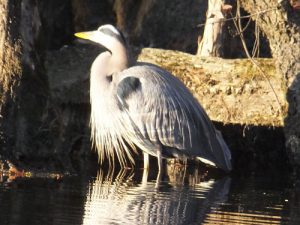 Spirit of Moonpie and I spent the 19th through the 21st on the Nottoway below Delaware. The water was in good shape and 45 degrees. Air temps ranged from 31 to 60 degrees. I saw no water quality issues and I did not see any trash to pick-up save a bucket in the swamp that I could not get to.

The fishing on this trip was very good. I did not do any casting to shore. All the fish I caught were caught on the blade bait vertical jigging. I caught five different species doing that: Speckle, Raccoon Perch, Catfish, Red Eye and Bream. I also caught two Chain Pickerel trolling, which was a first for me. I was stunned at how many Channel Catfish I caught jigging, and that goes for the bream also since this blade bait was pretty large. All the fish were caught in one curve in 18 to 12 feet of water.

We didn’t really see that many critters on this patrol. I also didn’t see my coon family this time, which upset Moonpie pretty bad. I was expecting to see lots of deer. Usually this time of year I get to see right many swim the river. It’s always fun to watch them try to lose the deer hounds and they usually get away from most, but occasionally there is that one dog that won’t get thrown off the scent and ends up picking up on the deer on the other side of the river.

There is a critter though that I have heard now at this particular camp the past two stays there. Every night about 11:30 something over in the woods starts making noises. It’s like a shriek but kinda subtle. I think it’s a Barn Owl. Juvenile Barred Owls sound similar, but there shouldn’t be any of those around right now. Anyway, this owl is quite vocal, it talks and talks and talks. It’s pretty neat for the first 30 minutes, but after three hours it gets kinda old when your trying to sleep. Plus, I’m a really light sleeper out there, so even though I know what it is, when it moves close to the tent late at night and starts and wakes me up, I’m kinda on edge.

Oh me, oh my achy breaky boat motor troubles are the pits. On the very first day right when I got to camp the outboard started acting up. Hard to start then would not go faster than idle or it would cut off. I guess it’s some problem with the fuel delivery system. These new-fangled fuel injected computer monitored engines are nice when they work but there are about 100 things that can cause this problem and ain’t much you can do about it while out on the water.

So, I just went old school and put putted around the three days like back in the day when everyone had little outboards like our 1.7 hp Neptune Mighty Might motor. That is why I was trolling ’cause trolling speed was as fast as I could go! I was going to stay four days this trip, but I decided I better not push my luck. As bad as the motor problems sucked though I thank the good Lord for getting me out AND BACK one more time on the two rivers we call the Nottoway and Blackwater.

Three of the four baby coons were spotted on the side of a large cypress tree, which was likely their... read more