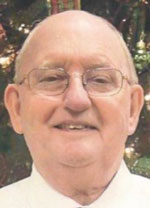 FRANKLIN — John Saunders “Johnny” Lankford, 81, of Franklin, Virginia, passed away with his family by his side on Nov. 27, 2019, in Asa’s Neighborhood at the Village at Woods Edge.

He was born on Sept. 11, 1938, in Franklin, to the late James Paul and Rebie Saunders Lankford, and was predeceased by his wife of 51 years, Jerline Cobb Lankford, and his brother, James Paul “Jimmy” Lankford Jr.

Johnny graduated from Windsor High School in 1956 and began working at Union Camp Corporation in the Traffic Department where he worked for 18 years.

Johnny, along with Freeman Harrell was also part owner/operator of the Hunterdale Bowling Alley.

Johnny was a past member of the Nottoway Investment Club, Franklin Masonic Lodge No. 151 AF & AM, and a former Virginia National Guardsman.

Johnny was known as the “Fish Man” and customer service and satisfaction were his first priority. He was a true Southern gentleman, a good friend to all and always had a genuine smile on his face. He enjoyed golfing, NASCAR racing, fishing and spending time with Brooke and Blake, who were the light of his life. He was a devoted husband, father and PaPa and was loved by all who knew him.

Johnny lived his final years in Asa’s Neighborhood at the Village at Woods Edge, where he won the hearts of many staff and caregivers.

The family would like to extend their sincerest love and gratitude to all of the caregivers and employees of Asa’s Neighborhood for the exceptional care, love, respect and dignity that was shown to Johnny and his family during his time there. Asa’s Neighborhood became his extended family and he loved them as such.

The funeral will be in Hunterdale Christian Church on Saturday, Nov. 30, at 11 a.m., with Pastor Jim Foreman officiating. Interment will follow at Poplar Spring Cemetery.

The family will receive friends in the home of Courtney and Bruce Whitley, 20057 Bethel Road, Courtland.