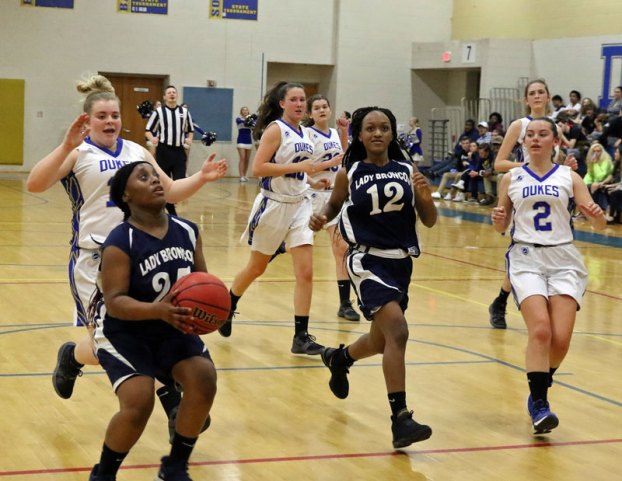 Miracle Monger eyes the basket for a shot. 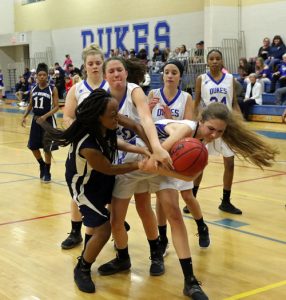 Lady Broncos and Lady Dukes fight for possession of the ball. — Frank A. Davis Tidewater News

The Franklin High School boys and girls basketball teams opened the 2019-20 season on Monday in Windsor High School to face the Dukes. Both the Broncos and Lady Broncos were successful with wins to start the season in a very positive way.

The Lady Broncos were in control for the entire game. The Lady Dukes made a run at the Lady Broncos in the third quarter, but it was not enough to close the score and cause a threat. At the sound of the final horn, the visiting Lady Broncos claimed their first win of the season with a 44-22 win over the Lady Dukes.

Lady Bronco Head Coach Mona Sumblin said after the game. “First game we got a win, that was our goal and we got this one under our belt. We got Surry on Wednesday and we know that is going to be a tough game. So we are going to do our best and that is all that we ask them to do. And we hope that our best is enough to get the victory. We still have some work to do in getting more shooters, more rebounds and playing better defense. But, overall they did good for their first game because we are kinda young and have a lot of new players but they did a good job for us.”

In scoring, the Lady Broncos had two players in double figures. They were Miracle Monger with 15 points and Arbani Wiggins with 11 points.

For the Lady Dukes, Cassie Aiken led in scoring with eight points.