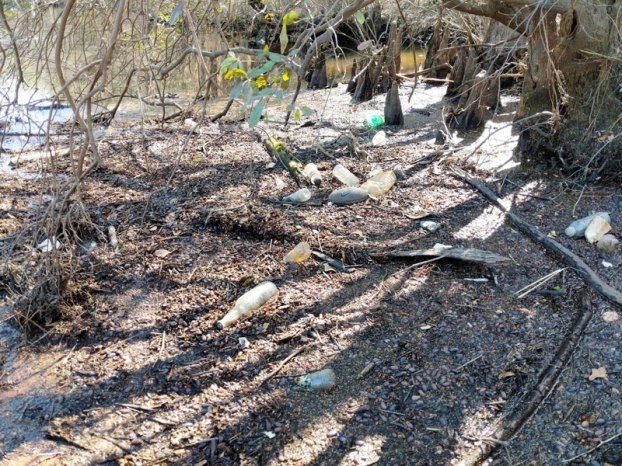 The RiverGuard recently found all this trash on the Blackwater River. -- Submitted Jeff Turner

Finding the keys to successful boating 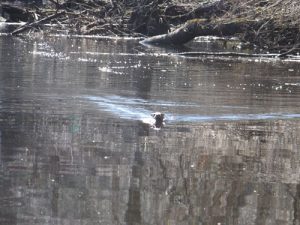 The Moonpie Critter Patrol spotted this otter swimming in the Blackwater River toward the RiverGuard. — Submitted Jeff Turner

Spirit of Moonpie and I spent the 29th through the 2nd on the Blackwater below Franklin. The water was still a little high, fast, clear and 45 degrees. Air temps ranged from 26 to 60 degrees.

The trash was very bad on this patrol as I expected. Heavy rains earlier in the month and very high water emptied the city of Franklin’s storm water canal of its stockpile of trash. Unfortunately, much of that trash was washed into the river then re-deposited on the shore downriver out of my reach. Still, I picked up a lot. I was stunned at the amount of Styrofoam cups, plates and food containers all over the place. I just don’t understand where all of that is coming from … yet. Also, the number of balls, basketballs, footballs and just … balls. One would think there are children upstream playing in the Southside ditches. All this trash is easily visible riding down the river and really kills the beauty of this Virginia Scenic River, and that’s a shame.

The fishing on this trip was good. I did not catch any shad, but I only tried for them about an hour. I was mostly fishing for striped bass since I only got to fish for one day. I caught the stripers jigging the ½ ounce blade bait just drifting with the lure about 2 feet off the bottom. I caught five. All but one was over the 18-inch minimum with the biggest going 20 inches.

Now I will explain why I only fished one day when I usually get two. One reason was the amount of trash, the other reason is I got to base camp that morning and had to spend an hour with the limb saw clearing my landing from where a tree had fallen that was blocking me. During that process my keys fell out of my pocket into the river. After clearing the landing, I was about to start unloading the gear onto shore and that’s when I discovered them missing. I had not been on shore yet, so I knew they were not there. You have to realize at the time I did not know they fell in the water, so of course I tore the boat apart looking for them to no avail. The next reasonable expectation was that I had left them in the truck or dropped them at the boat landing. So, I took off back upriver to the boat landing to look for them. They were not there much to my horror, but I had a spare so I knew at least I could get home.

Then the reality set in that my keys were in the river back at base camp. Back down the river I went knowing the chance of finding them was pretty slim. When I got back to camp, I decided to try my new super duty magnet made just for such a thing. I tried that for an hour and finally gave up. The leaves were a foot thick on the bottom of the river there and I figured the keys were under all that and probably thwarting the magnetic effort. So, I grabbed the litter getters and started meticulously removing leaves and sticks etc. from around where I had been in the water cutting that tree. I was determined to find those keys because by then I was truly mad at myself for being so stupid. If I had to take that 6 foot x 6 foot piece of river bottom down to dirt I was going to do it.

After an hour I had nothing. I took a break and sat there just starring at the water. I decided then to take a chance and try over in a spot I didn’t think they would be. On the second grab of pine straw and leaves I pulled up a wad of that stuff and saw the keys just for a second as the fell back into the water. I didn’t care if I got wet at that point and plunged my upper body over the side of the boat, thrusting my arm into that cold, dark tannic water, and lo and behold grabbed a handful of keys! I was elated, joyful and thankful all at the same time, and I thanked the Lord for allowing me to find them.

So, I have come up with a new system for the keys, they now go into a bottle that will float because the key to successful boating is to NOT lose your keys in the two rivers we call the Blackwater and Nottoway.

By Jeff Turner Spirit of Moonpie and I spent the 2nd through the 4th on the Blackwater above Burdette. The... read more