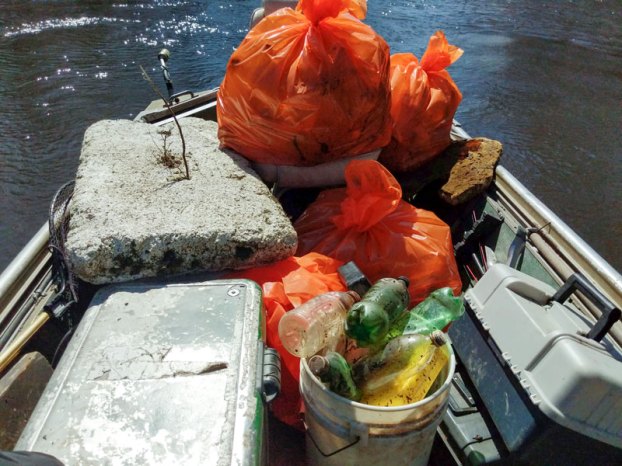 An unwelcome abundance of trash was retrieved in and around the Nottoway River this past week. -- Submitted Jeff Turner 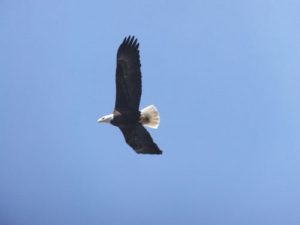 As the RiverGuard was cleaning trash around a tree next to one that had an eagle’s nest, he spotted this eagle flying around and making noise. –Submitted Jeff Turner

Spirit of Moonpie and I spent the 8th through the 10th on the Nottoway below Courtland. The water was at 7 feet on the Sebrell USGS gauge, clear, fast and 48 degrees. Air temps ranged from 36 to 62 degrees and it was pretty darn windy. I saw no water quality problems except for the stupid amount of trash.

Yes, the trash on this trip was just plain crazy. Two-hundred pounds worth, mostly glass and crazy amounts of Styrofoam. One piece of foam was 4 feet by 2 feet long. And shoes, more to the point, sandals/water shoes/flip-flops. How is it so many … river enthusiasts upriver lose their damn shoes? I don’t get it. How about light bulbs? Why so many light bulbs, which has to be from household trash coming into the river from somewhere upriver of Courtland. I had so much trash I had to get dad and Nancy to come unload me because I had no more room in the boat. So much old trash, most all that glass was older stuff, which with the light bulbs makes me think that in a swamp somewhere upriver must be a dump and when that high water we recently had gets up in there it washes that crap out. Sure would like to know where that dump is … .

The fishing on this trip was TERRIBLE. I caught only five shad, and it won’t just me ’cause I saw two other boats Sunday and they were not catching any either. That’s weird because the shad are being caught in bunches upriver from Courtland and downriver from Courtland. Maybe it’s just too trashy around that part of the river and the fish just blow through there? I also caught a blackfish and a large shellcracker and one redthroat jigging for stripers. I didn’t even have the first striper hit.

Part of the mission on this patrol was to check on the eagles’ nest upriver from Courtland. I ’bout had a heart attack when I got to the location and saw a large pine tree in the river. Thank goodness it was not the nesting tree but the tree right beside it that went down. And that tree had a ton of trash in it.

I hadn’t got going good on that trash pile when I heard the distinct whistling voice of an eagle overhead. I was so glad to see that the nest was occupied again this year. One of the adults flew around a lot while I was cleaning up, not sure if it was happy I was doing that or not happy I was so close to the nest, but it was very vocal that’s for sure.

I’m going with it was happy and giving me praise for cleaning up its little part of world on the two rivers we call the Nottoway and Blackwater.

Finding the keys to successful boating