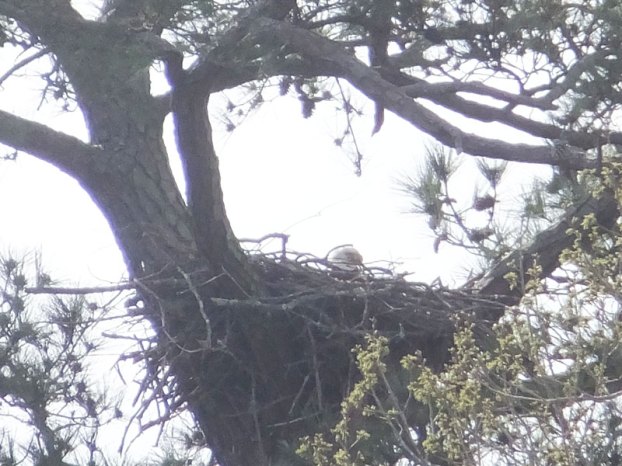 The RiverGuard spotted this eagle in the nest at Cherry Grove, and guesses the birds he saw are offspring of the ones witnessed back in 1998. -- Submitted Jeff Turner

Spirit of Moonpie and I spent the 16th through the18th on the Blackwater below Franklin. The water was clear, 60 degrees and low. There was a significant amount of sawdust pooled up in the river around the mill near the conveyor nearest the river and the shoreline was also covered in it at that location.

The trash on this trip was very bad. Sadly, I could not pick much of it up as it was deposited way up on shore during the previous high-water event. I also removed 10 illegally set limblines. The limblines did not have the name, address and phone number attached as required. What really gets my goat though is the fact that two lines had dead rotten or half-eaten catfish on them. That’s just plain sorry. Five other lines had fish on them and they were released. VDGIF has received the information on the lines as well as the boat number of the people who did this. I will follow up on what VDGIF determines in this case in a later report.

The fishing on this trip also was very bad. Don’t know what’s up with the shad in the Blackwater. Don’t know if they ran early and I missed them or they ain’t got here yet or it’s just gonna be a poor Blackwater shad year? I fished hard for stripers also and didn’t have so much as a hit. I only caught like 5 shad the whole trip, a couple of largemouth and a couple chain pickerel. I had lots of hits on the shad rig, small hits, like herring feel like. Its really early for them, but that seems to be what is happening on the river, like everything is early.

One of the missions of this trip was to get downriver to the site of where the eagle nest has been for years at Cherry Grove. This past year the nest after 20 years fell out of the tree due to a rotten limb breaking. All of that nest went on the ground. I am happy to report though that the eagles returned and rebuilt the nest. It’s not as big as the old nest, but it’s a nest and they are using it. Hopefully, the TN can use the pic, if not it’s gonna be on the RiverGuard Facebook page. A duck blind has also been placed there and I have reported that to VDGIF and hope they will red flag that blind.

I was kinda surprised that the eagle nest was rebuilt in the same location. Certainly, the original pair of eagles that I saw back in 1998 are not the same eagles I am seeing today. I’m guessing they are the offspring though of that original pair. It does my heart good and I am always glad to see a new generation whether it be humans or eagles enjoying the two rivers we call the Blackwater and Nottoway.

As the RiverGuard was cleaning trash around a tree next to one that had an eagle’s nest, he spotted this... read more