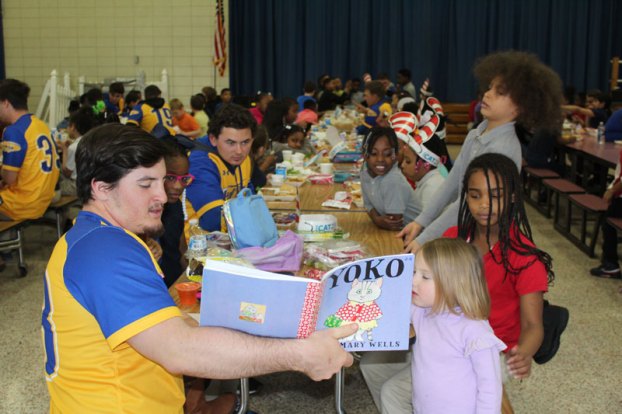 On Friday, March 10, Hurricanes catcher Dawson Stevens and his teammates read to S.P. Morton Elementary School students to celebrate Read Across America Week. Three days later, he got word that Camp Community College had postponed its baseball season until April 3. Less than a week later, he got a text from a teammate informing him the season had been cancelled altogether, owing to the threat of COVID-19. -- File Photo 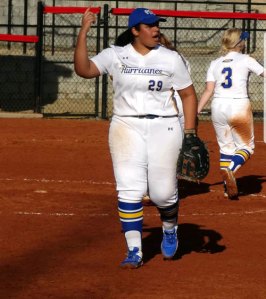 Sophomore Lady Hurricane Morgan Owens is concerned the cancellation of the Lady Hurricanes’ spring season due to COVID-19 may set her back in her process of transferring to a four-year school. –Submitted

Dawson Stevens of Smithfield, a catcher for the Camp Community College Hurricanes baseball team, was on a bus with his teammates heading back to campus from a game versus Mary Baldwin University in Staunton when he got the news. The NBA had suspended basketball season, owing to Utah Jazz player Rudy Gobert having contracted the novel coronavirus (COVID-19).

That was Thursday, March 12. The very next day, Stevens and his fellow Hurricanes got the word that the college had postponed its season until April 3. In spite of this, he and his teammates remained confident they’d still get a chance to play ball this spring.

“We thought the coronavirus would blow over,” Stevens said.

Less than a week later, he had been about to head over to Beale Park in Smithfield to practice hitting when he got a text from one of his teammates: in an effort to prevent the further spread of COVID-19, Camp’s entire spring sports season had been cancelled. Not postponed. Cancelled.

“The best way to put it, it just sucks,” Stevens said. “It’s a very fast transition from, ‘OK, we’re suspended for a few weeks’ to ‘our season’s done,’ in less than a week. I think that’s why it hurts so much for most of us … it’s not knowing how far we could have gone.”

Baseball, he explained, was one of the main reason he had chosen to come to Camp. He had been accepted to Virginia Tech and Christopher Newport University, both four-year schools, while still in high school, but ultimately chose the community college route after being recruited at a Smithfield High School baseball game by Camp’s former head baseball coach, David Mitchell.

The March 12 scrimmage game, Stephens added, was one of the rare opportunities he’s had in his two years as a Hurricane to actually take the field and play during a game. “It was the best I’ve felt in two years since playing in high school,” he said. “Even though the season ended early, it felt good to go out with a win for the whole team.”

Rufus Hurdle of Chesapeake, one of the Hurricanes’ team captains, was likewise disappointed to learn of the season’s early end.

“It really sucked,” he said. “We just started to click again. We went through a rough patch at the beginning of the year. Things were starting to fall back into place.”

Hurdle, who’s dream is to one day play baseball professionally, had been hoping to get recruited by another four-year college, having transferred to Camp from Old Dominion University after being “red shirted” his freshman year. The term refers to students who end up sitting out a season due to the team’s roster being at capacity.

A few four-year schools have contacted Hurdle, so recruitment is still a possibility, he said, though it’s “kind of difficult with them not being able to see you play for the rest of the year.”

“I think with my contacts and the fact I’ve coached at the [National Collegiate Athletic Association] Division I and Division III levels, and worked in pro scouting, we’ll be able to get them a home; it just may not be the options they were hoping for,” said Camp’s new head baseball coach, Daniel Rollins, who took over the program last June, when asked about students like Hurdle who hope to transfer to four-year schools.

Hurdle’s current front-runner school is Ferrum College, an NCAA Division III school located in Ferrum, Virginia. He plans to major in business management and, in the event that playing professional baseball doesn’t work out, hopes to become a sports agent. Stevens hopes to transfer to Virginia Tech and major in finance, possibly going for a master’s in business administration after earning his undergraduate degree. He isn’t planning to play baseball there, however, though there is a possibility he will be offered the opportunity to help manage the team.

“This is uncharted territory for collegiate athletics as a whole,” Rollins said. “For our baseball program, the effects of the pandemic have been devastating. I have stressed since I took over the program last June that this game can be taken away at any time and that we need to appreciate the opportunities we have. I never expected this to be the way their seasons, and for some, their careers, would be ended.”

“There is definitely a feeling of emptiness right now throughout our athletic department,” added Camp’s athletic director and head softball coach, Carrie Hoeft. “These three months of the year are something our athletes and coaches train for year-round, and to have it taken away has not been easy to deal with. Even knowing that it’s for the best and is meant to keep them out of harm’s way, it feels incomplete.”

That said, the National Junior College Athletic Association has offered this year back to spring sport athletes who wish to stay another year, meaning even those who will graduate from Camp this year will still be eligible to play one more season as a Hurricane or Lady Hurricane – that is, if they chose to stay in the area rather than transfer to a four-year school.

“Most sophomores will likely not come back to play, as they will be moving on to a four-year college or pursuing a career,” said freshman Lady Hurricane Savannah Schwab. “Not only does this take away a year of softball from them, but it also removes the chance for our team, who spent months creating a team relationship, to play together.”

“This was my sophomore year, so in a way, I feel like it’s kind of pushed me back in my process to transferring to a four-year school,” added fellow Lady Hurricane Morgan Owens.

“It might be the end of my baseball career,” Stevens said. “I had the time of my life [at Camp] and am glad I went there … because of the guys on the team.”