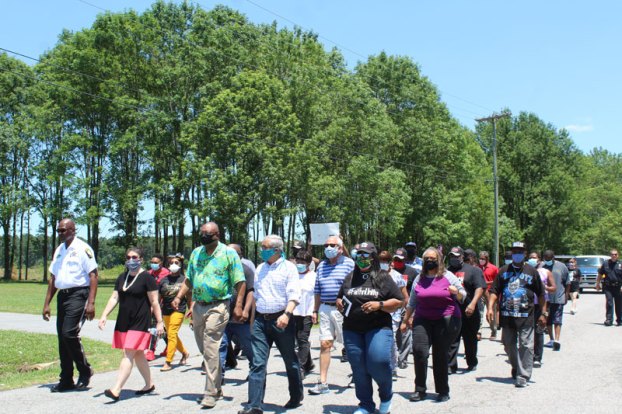 Congressman Bobby Scott (D-3), fourth from left in front, joined in demonstration on Saturday afternoon that began at Armory Field and culminated at Camp Community College. The event was sponsored by the Franklin and Vicinity Ministers Conference. -- Stephen H. Cowles The Tidewater News

The protest on Saturday afternoon in Franklin couldn’t have been anything but peaceful — it was led by several members of the Franklin and Vicinity Ministers Conference. All who spoke or prayed called for justice, equality and an end to devise racism and brutality in this country. 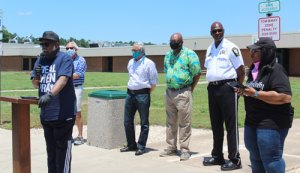 Several members of the Franklin and Vicinity Ministers Conference spoke or led in prayer at the event. — Stephen H. Cowles The Tidewater News

The most recent demonstration began at the parking lot in front of Armory Field. On the way to the nearby Camp Community College, about 50-plus people walked, carried signs and chanted now-familiar slogans such as “Black lives matter,” “Get off my neck” and “No justice, no peace!”

There were also around 30-plus participants riding motorbikes or cars. They led the charge by driving throughout the city before meeting everyone else at the school parking lot.

At the venue, Apostle Bobby Evans said, “Unity in community is our immunity.”

The Rev. Willis Freeman prayed, “That justice might take place.”

The justice to which he referred stems from recent incidents of violence against black Americans such as George Floyd in Minneapolis, Minnesota, and Breonna Taylor in Louisville, Kentucky. As a result of the killings, there had been violent reaction in the forms of looting and burning property in America.

No such rioting has occurred during recent protests in Franklin, Courtland and Windsor.

The Rev. Nathaniel Gomillion from Ivor said if there’s no justice, there’s no peace. He quickly added that the peace of which he was speaking was not about calm and quiet, but the kind that arises “in the presence of Jesus.”

The pastor also encouraged everyone of age, particularly young adults, to vote in elections.

That call was echoed by Congressman Bobby Scott (D-3). He added that legislation— “Justice in Policing Act – is in the works to curtail violence by law enforcement.

Toward the end of the gathering, Evans recited Dr. Martin Luther King Jr.’s famous speech, “I have a dream,” which was rewarded with much applause and cheers.