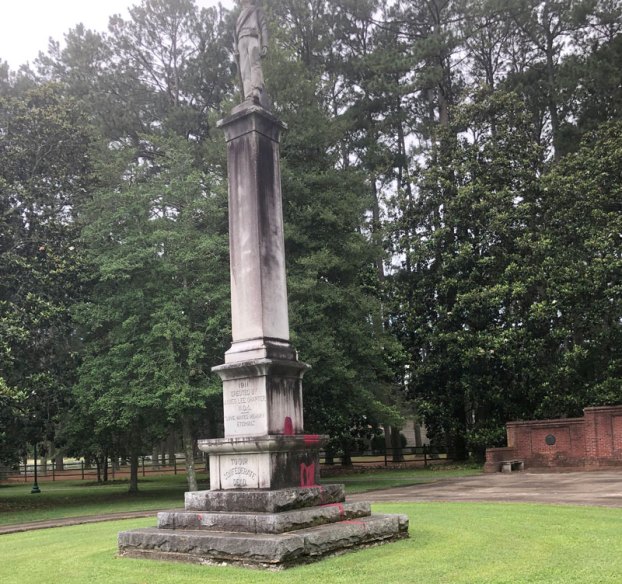 The monument to Confederate dead at the park between Clay Street and Meadow Lane in Franklin was vandalized by a person or persons unknown sometime in the evening of July 8 or early morning of the next day. The paint has already been cleaned via a power-washer. -- Submitted Orrin P. Rockwell

A person or persons unknown splashed a reddish-colored paint onto a side of the Confederate monument in Memorial Park in Franklin either sometime Wednesday evening or early Thursday morning.

Sgt. Scott Halverson, spokesman for the Franklin Police Department, stated via email that the communications center got the call about it at 9:50 a.m. Thursday. He added that there were no words written on the site. Public Works used a power-washer to clean off the paint, which was done by noon.

As previously reported in June, City Manager Amanda Jarratt told Council members that over the past few weeks the city has received several requests to relocate the monument. There have also been calls to keep it in place. While Virginia localities are permitted by law to remove Confederate markers — that became effective July 1 — there’s still the necessary step to conduct a public hearing.

In response to questions about the vandalism, Jarratt told the paper that City Council will indeed have the issue on its agenda for the meeting on July 13.

“At this meeting they will provide staff guidance as to whether or not they would like to hold a public hearing regarding the movement of the statute in accordance with the Code of Virginia. The City Council has received some additional public comments in support of the removal of the statue and also in support of leaving the statue in its place. All of the comments will be read into the public record at the meeting on July 13 during Citizen’s Time.”

The statue was set up in 1911 and shows a Confederate flag and the inscription, “Erected by Agnes Lee Chapter UDC, love makes memory eternal, to our Confederate dead.”

“UDC” stands for the United Daughters of the Confederacy, the organization of women descended from Confederate veterans. The UDC paid for the cost of many such Confederate monuments in the 20th century not only in the South, but throughout other parts of the country and even one in Canada.

The magazine you’ve been asking for — Western Tidewater Living — has arrived at our office, and copies are available... read more