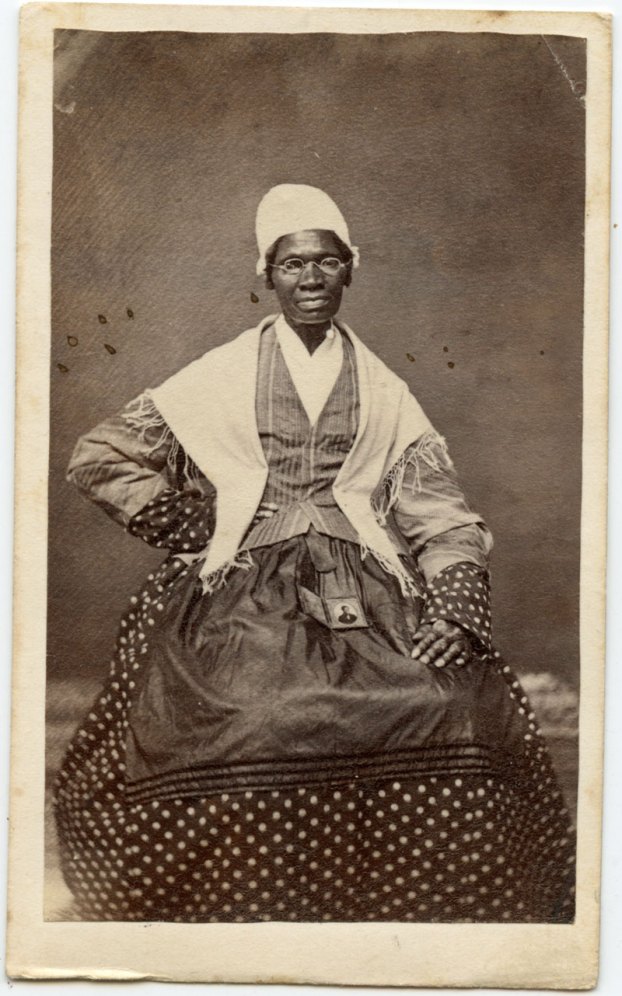 A carte de visite of Sojourner Truth. The picture was taken in 1863, the year that the Emancipation Proclamation was signed. -- Submitted Doug York

In my collection I have this carte de visite or CdV of Sojourner Truth. This photograph of her was taken in Michigan in 1863, this was the year the Emancipation Proclamation was signed, and the year the United States Colors Troops was organized. In this photo you will see there is an open cased photograph of her grandson James Caldwell sitting on her lap. He was one of the members that joined the famous USCT’s 54th Mass regiment and would go on to fight at Fort Wagner in South Carolina where he would be taken prisoner and held in a Confederate Prison for most of the remainder of the year.

Sojourner Truth was an African American evangelist, abolitionist, women’s rights activist and author who lived a miserable life as a slave, serving several masters throughout New York before escaping to freedom in 1826. After gaining her freedom, Truth became a Christian and, at what she believed was God’s urging, preached about abolitionism and equal rights for all, highlighted in her stirring “Ain’t I a Woman?” speech, delivered at a women’s convention in Ohio in 1851. She continued her crusade for the rest of her life, earning an audience with President Abraham Lincoln and becoming one of the world’s best-known human rights crusaders.

Monday, June 2, marked the day she left New York to start her career as an abolitionist and women’s rights activist.

That day also represented nearly a week of continued protest over the way African Americans have been treated. The outcry over another African American being killed, murdered by the hands and knee of a police officer. Will America use this time to truly heal itself from racial inequality?

I am 55 years old this year. I was but a toddler during the 1960s when the Civil Rights law was passed. When protest and riots were taking place. When the great Man Dr. Martin Luther King Jr. was assassinated.

Let the healing start with you! Have the conversations. Have love! Let’s heal our nation.

DOUG YORK is a collector of cartes de visites living in Isle of Wight County. Contact him at liferecovery@cox.net.

By Elizabeth Harris Summer is a reality check for recent high school graduates. Those college admission letters that created such... read more