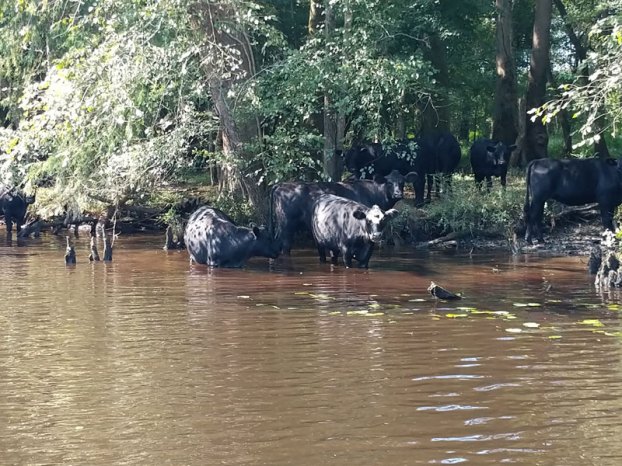 The RiverGuard saw these cows grazing by and standing in the Blackwater River. -- Submitted Jeff Turner

Spirit of Moonpie and I spent the 5th through the 7th on the Blackwater below and above Franklin. The water was at a normal level and looked generally good with a nice flow. Air temps ranged from 60 to 80 degrees; 60 actually felt a little chilly to these old bones after enduring such a hot summer.

The trash on this trip was pretty bad. I figured it was going to be like that from all the storms we have had plus the fact I have not been on the river in seven weeks due to my back going out. The bulk of the trash was from the Franklin storm water canal. I found the normal array of footballs, basketballs and assorted “other category” balls. Also a large amount of household trash that eludes me how that gets in the city ditches. By household trash I mean stuff like gallon milk jugs, chicken wing Styrofoam packaging, Windex bottles, Tums bottles, etc. Not trash that is being consumed walking or riding down the road and discarded into the gutters and ditches. Anyway, I picked up what I could get to in the pontoon boat, which ain’t the most maneuverable craft for that job.

The fishing on this trip was pretty darn good. I bagged lots of bream, lots of bass and plenty of catfish at night. I caught the bass on a tiny torpedo and an old Hawaiian Wiggler and Sputterfuss that I put back into service. Sometimes it’s just hard to beat those old classic lures. The catfishing at night was pretty decent. The biggest one weighed only 10 pounds, but the action was steady especially the second night upriver from Franklin.

Well, it looks like we are going backward in the efforts to protect our rivers. Once upon a looong time ago when I was young I remember lots of cows and lots of hogs had access to the river. Then when people got educated and learned that practice was bad for the rivers, people started fencing the livestock out of the rivers and swamps.

NOW, the practice of letting the livestock into the river is becoming commonplace again. NOW we have cows in the river below and above Franklin. Cows in the river are a known point source for fecal coliform. Whether they poop in the water or along the shoreline, they are adding to the problem of elevating fecal coliform levels in the Blackwater River. The Blackwater, by being a swamp-fed type river, is highly susceptible at having elevated levels with this problem without the additional E. Coli loads that cows in the river introduce.

In the early 2000s, when I helped DEQ develop TMDL (Total Maximum Daily Load) criteria for the Blackwater (and Nottoway), it was then well established and common knowledge that livestock should be kept out of the river. Sadly, however, still to this day our laws do not address that problem in this watershed. So it is basically up to the livestock owners to be responsible for looking after our rivers. Unfortunately with the cow issue, that is not the case on the two rivers we call the Blackwater and Nottoway.

Wildlife can give dead trees another life

By Kristi Hendricks Master Gardener Stumped whether to take down the tree that died last winter or grind out the... read more