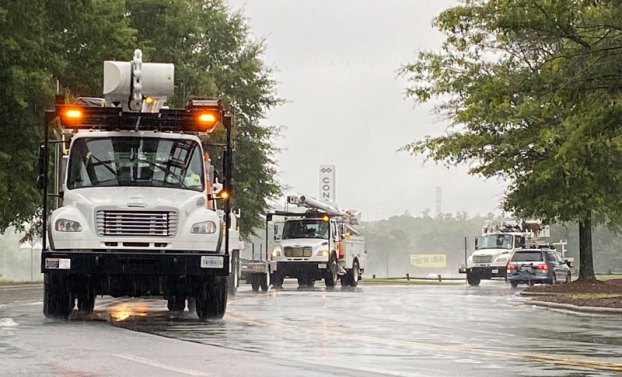 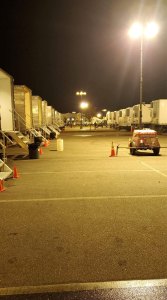 This parking lot full of trailers will be Daniel Hobson’s home for the next few days to weeks as he works alongside electrical crews from local and out-of-state co-ops to restore power in Foley, Alabama. Submitted | Jessica Parr

Daniel Hobson’s accommodations while in Foley, Alabama, consist of a parking lot filled with tractor trailers — some with bunk beds, some with showers and some with eating areas.

Each trailer is hooked up to a generator.

As for the rest of the city of roughly 17,000 people, located about five miles inland from the Gulf Coast, power isn’t expected to return for another two weeks.

Hobson is one of four line workers Windsor-based Community Electric Cooperative sent 900 miles away to Baldwin County on Sept. 17 to help restore power in the aftermath of Hurricane Sally, which made landfall a day earlier as a Category 2 storm.

“We just got here about three hours ago,” he said on the afternoon of Sept. 18.

While in Foley, Hobson has been working for Baldwin EMC, a co-op based in the nearby town of Summerdale. More than 78,000 Baldwin customers were in the dark after Sally destroyed miles of power lines and thousands of power poles. He estimated about 30% of the area’s power infrastructure is beyond repair and would have to be rebuilt from the ground up.

Most of the damage, he said, is from downed trees falling on houses and across roads, as opposed to the heavy flooding he saw last year when he got sent on a similar relief assignment to North Carolina.

“Haven’t seen any flooding so far, but we’re not on the shore,” Hobson said.

The Virginia, Maryland & Delaware Association of Electric Cooperatives coordinated the mutual aid response. Phil Jarvis, manager of safety services for the association said in a Sept. 17 press release that Alabama cooperatives estimated they would need at least 1,000 line workers, and particularly right-of-way crews, to rebuild the state’s ravaged electric system.

“The response came together very quickly and we’re committed to help get the lights back on in these hard-hit areas,” Jarvis said.

“We are fortunate to be part of a nationwide network of more than 900 not-for-profit electric cooperative,” said Community Electric Communications Manager Jessica Parr. “Our unique mutual-aid program was created years ago to provide skilled assistance in restoring power following severe weather and natural disasters. Our crews never hesitate to answer the call from our sister co-ops. Earlier this year, Community Electric was on the receiving end of this assistance following Tropical Storm Isaias.

Parker Oil, another business headquartered in southern Isle of Wight County, is also preparing to assist if needed. Typically, when Parker trucks are dispatched for hurricane relief, they’re tasked with resupplying utility trucks like the ones Community Electric sent, or generators used at essential locations, such as pharmacies.

“We are on standby,” said Franklin office manager Kevin Lackey. “We just haven’t gotten the word yet.”

COURTLAND Following several speakers at a public hearing and discussion among the Southampton County supervisors, the board unanimously agreed at... read more