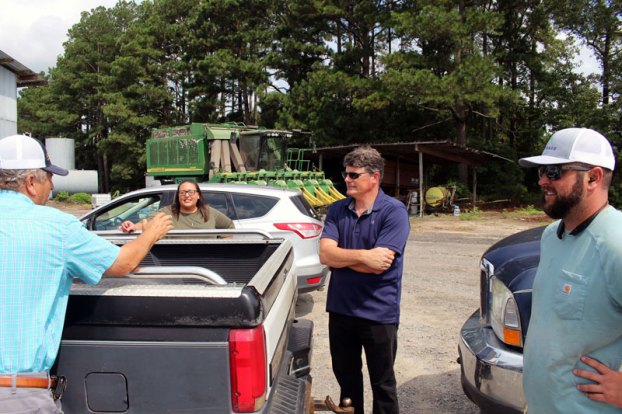 J.W. Jones, left, Livvy Preisser of the Isle of Wight County Cooperative Extension, Burke Moeller of the Farm Bureau and Kirk Jones discuss what they’ll talk about during a video interview segment for Real Virginia, a TV program that’s produced by the Virginia Farm Bureau. The Joneses are the proprietors of Jones Farms in Windsor. The program highlights farm-related news and features from around the state. -- Nate Delesline III | Smithfield Times 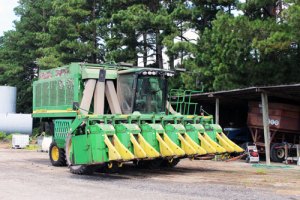 A John Deere 9996 cotton picker machine is one of the tools in use at Jones Farm in Windsor. Kirk Jones, the farm’s vice president, is among several Isle of Wight people and stories that was featured in an episode of Real Virginia, a program produced by the Virginia Farm Bureau that highlights agriculture stories from across the state. — Nate Delesline III | Smithfield Times

Kirk Jones has been in the farming business “ever since I could tie a brick to the clutch.”

Jones, 32, is vice president of Jones Farms Inc. in Windsor. It’s a family business that he runs along with his father, J.W. Jones, where corn, cotton, soybeans, wheat and peanuts are grown. The Joneses also have 120 head of beef cattle.

The younger Jones has had an opportunity to share the story of his business and achievements with a statewide audience in September on “Real Virginia,” a TV program produced by the Virginia Farm Bureau. Jones and other Isle of Wight agriculture professionals were featured in the show’s county close-up segment.

“Our program is aimed at the suburban or urban folks who have a connection to agriculture but don’t experience it every day in their lives,” said Burke Moeller, who recently visited Isle of Wight to produce the video segments. The target audience for the show is consumers who “are still concerned about the food that they put on their table for their families and where it comes from and how it’s produced and grown.”

Isle of Wight had 237 farms on 80,672 acres in 2017, and the market value of all agricultural products sold that year was more than $64 million, according to the Farm Bureau.

Beyond agriculture, the show is also a window into Virginia life and culture, Moeller said.

“I could see how somebody in the mountains in the west, or up in Northern Virginia in the dense suburbs may not have heard of Isle of Wight County. Or they’ve just driven by and seen the signs on their way to the beach. This is a way to provide some more information about what’s happening here.”

Jones was also honored this year as the Peanut Efficiency Award winner for the upper Southeast region. The award was to be presented at the Southern Peanut Growers Conference.

“I was very humbled by getting that at my young age. It was an honor and a privilege to accept it. It was kind of a shock when it all happened,” said Jones.

But like many other events, the conference was postponed until next year due to COVID-19. Thankfully, social distancing is usually easy to maintain on the farm. For errands in town to the hardware store or auto parts store, Jones said, “we still continue to wear our masks to help do our part, but as far out here, we’re socially distanced enough. Our cows don’t require us to wear masks.”

The element of risk of the agricultural business, however, is a serious matter, with big money on the line every year invested in something where many aspects of the equation are beyond human control.

“Farming is the biggest gamble,” Jones said. “It’d be a whole lot easier to go to Vegas and bet it all on red or green or black and just get it over with. When you plant in April and you don’t know until September what you’ve got, it just plays a lot on you, especially when you don’t have any rain, because we’re all non-irrigated. Everything we get comes from the sky.”

The coronavirus pandemic and the weather have been a double whammy for farms and farm-related businesses in Isle of Wight and Western Tidewater, according to Livvy Preisser, the Isle of Wight extension agent.

“COVID has really affected our agri-tourism and niche market producers like farmers markets,” Preisser said. “They really had to adjust to the PPE and the regulations, social distancing. They’ve had to get really creative with their operations, because the public comes out to their farm. So we’ve just been seeing a lot of adapting.”

On commercial farms, “COVID hasn’t really affected them too much. We’ll probably see some fluctuations in the prices later on during harvest, but the biggest thing for us this year has been the weather. The weather has been detrimental to our corn crop.”

Preisser said the regional corn crop might be a 30% to 50% loss this year. For other crops, the outlook is better “but we won’t know that until harvest time,” she said.

The “Real Virginia” episode (No. 318) featuring Isle of Wight is available for viewing on the Farm Bureau’s YouTube channel. Visit https://www.youtube.com/watch?v=qCR87NbD2t8&feature=youtu.be.

FRANKLIN Your photograph could become the cover of The Tidewater News’ calendar for 2021. One grand prize winner will also... read more