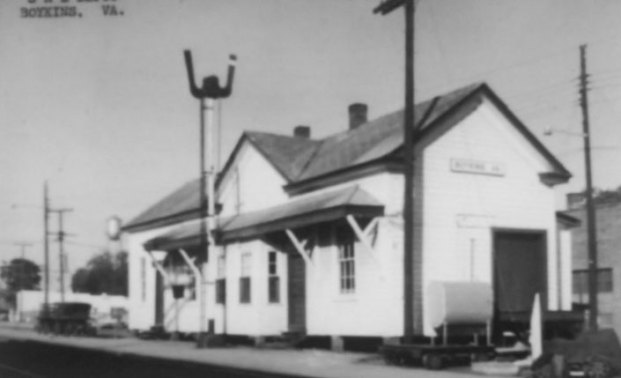 The Boykins train Depot as it appeared in the town during the 1950s. Submitted

Looking Back: Boykins was founded by early-day settlers

A good portion of the town that we now know as Boykins was once part of a tract of land, originally owned by a man named Edward Boykin of England. He settled in the vicinity in 1674. During the following year, his son, William Boykin, for distinguished service to the British Crown, received 15 land grants, 525 acres each, located at that time in Isle of Wight County. (Southampton County was formed in 1749 when Isle of Wight County was divided at the Blackwater River.) Many Welsh and English people were settling in the eastern region of the Virginia colony. The area now known as Boykins was a desirable place to settle.

The deed for the land that eventually became known as Boykins is traceable to May 16, 1829, when John Boykin and his wife, Catherine conveyed their portion of the original property to Littleton Mason. Mason. The Boykin family then moved to Mobile, Alabama.

Later, title to the John and Catherine Boykin property evolved down to Francis Rochelle who, on March 19, 1835, sold to Edward Beaton the portion that was to become known as Boykins. Beaton, who had moved from Isle of Wight County to the area — and built a house, is credited with the founding of Boykins.

On Oct. 31, 1836, the Portsmouth and Roanoke Railroad Company (later named Seaboard and Roanoke Railroad Company, and still later re-named Seaboard Airline Railway) completed a railroad that ran from Portsmouth, Virginia, to Weldon, North Carolina. The railroad ran through Southampton County, from Franklin Depot to and through the area that was to become known as Boykins Depot; there, a water tank and a woodyard were established.

Previously — on April 19, 1836 — a post office was established with Edward Beaton as postmaster. The post office was discontinued on June 22, 1848, but was re-established on Jan. 3, 1852, with Edward Beaton again as postmaster. The Boykins post office over the years was located in various places — including, in 1883, the hotel operated by Samuel B. Drewry; in 1885, in William M. Beaton’s store; and in 1898, Edgar B. Beaton’s store — located next to the residence of R.H. Powell.

A good portion of the land acquired by Edward Boykin in 1674 remained in the Boykin family for nearly two centuries. “Rosedale” was the last home of the family in Southampton County — Richard Simon Boykin and Martha Urquhart Boykin.

In 1886, the Tar River Branch of the Seaboard Airline Railway was built from Boykins to Lewiston, North Carolina, a distance of 35 miles, giving Boykins more geographical importance and connectivity into North Carolina. Boykins became a major railroad transportation center.

In 1884, The Honorable J. Denson Pretlow of Franklin, representing Southampton County in the Virginia General Assembly, introduced an act to incorporate Boykins Depot and to give it the name, “Town of Boykins.” The legislation was approved on Nov. 24, 1884. A Mayor-Council form of government was established with William M. Beaton as the first mayor.

During the latter part of the 19th century, Boykins was growing but it was a rather slow growth. Most development was occurring along Main Street — both residences and businesses. A hotel was built. Sidewalks were maintained using 2×8 lumber for curb boards. Street illumination was by oil lamps on posts placed at intervals; and, one of the duties of the town sergeant was to light those lamps each night.

During the early 1900s period, things started to pick up. However, due to an outbreak of malaria, things began to slip back a bit. After 1904, there was significant growth along the streets that intersected with Main Street, including Beaton, Bryant and Virginia avenues — and Elizabeth, Wilson, Marshall and Broad streets. 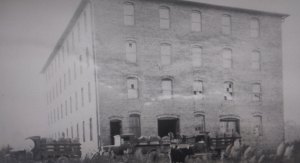 The Hines Buggy Company in 1911. Submitted

A significant impact on Boykins’ early-day economy was the existence of the Boykins Buggy Company that was successor to the Hines Buggy Company, which had been located in Murfreesboro, North Carolina. In the early 1900s, O.W. Gray and Brother of Boykins were carrying in their retail business the whole line of buggies manufactured in Franklin by the Parker Buggy Co. Gray was constantly fussing about delivery schedules and “freight rates” from Franklin; he lobbied openly for a buggy and wagon works factory for Boykins itself.

So, a mayor’s committee, composed of Gray and a few others, raised $15,000 in seed money from interested citizens and provided Hines with a free lot adjacent to the Seaboard Railroad. A four-story brick building, 60 feet by 100 feet, was started in early 1911. Boykins had it first home-produced buggies before the year’s end. Before long, Hines was turning out buggies at a rate of 150 per month. 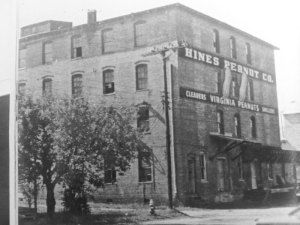 The Hines Peanut Company in Boykins during the 1940s. Submitted

Obviously, Boykins is primarily an agriculturally based community, and it is impossible to list and describe all the businesses — both agricultural and otherwise — that have over the years contributed to Boykins development and growth.

In the 1950s, 1960s and 1970s, Boykins experienced a great deal of expansion, population growth and industrial development. In 1952, Aster Nut Company was established, ultimately employed up to 150 persons. White Way Foods was a major supplier of sandwiches to various institutional and other food vending establishments. White and Lassiter Lumber Company began shipping its products abroad. Porter’s Wood Products, a major producer of industrial wooden pallets, has been operating for many years. Boykins Narrow Fabrics Inc., a world leader in the manufacture of seat belts and other industrial webbing, began its operation in 1961, following its placement there through efforts by Norfolk-based Tidewater Virginia Development Council.

Boykins continues to be a clean, picturesque, friendly and progressive town — still dear to the hearts of many people.