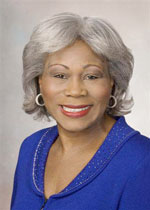 A judge dismissed all charges against state Sen. L. Louise Lucas on Monday.

Portsmouth Police had charged the senator with two felonies — conspiracy and “injuring” a monument valued in excess of $1,000 — in connection with her presence during a June 10 protest at which the city’s now-removed Confederate monument was damaged.

The senator — whose 18th District includes parts of Franklin, Suffolk and the counties of Isle of Wight, Southampton and Surry — had been caught on camera the day of the event saying to Portsmouth officers, “They’re going to put some paint on this thing, and y’all cannot arrest them.”

Several hours after Lucas left the scene, a man was severely injured when protesters beheaded four Confederate soldier figures attached to the monument and caused one to fall on him. Lucas denied having outright told the protesters to do anything illegal.

Portsmouth Police Chief Angela Greene had announced the charges against Lucas and 18 other protestors in August, two months after the incident. The other 18 protesters — a list that included the president and vice president of Portsmouth’s NAACP chapter, a Portsmouth School Board member and public defenders — also saw their charges dismissed Monday.

According to the dismissal motion brought by attorneys with the Portsmouth Commonwealth Attorney’s Office, the case file evidence and correspondence with the investigating officer indicated no investigation to determine the value of the monument — a key element in proving destruction of a monument valued over $1,000. In fact, “the Portsmouth Police Department attempted on October 8, 2020, over two months after charges were filed and nearly four months after the incident, to investigate regarding the value of damages,” the motion states.

The motion further argues what is known as an entrapment-by-estoppel defense, which can be used when government officials assure a defendant that his or her conduct is lawful, but later prosecutes that person after the fact.

“It is a violation of the charged individuals’ due process rights under the United States Constitution to punish them for conduct that was done under circumstances where law enforcement either explicitly or implicitly misled them to believe that such conduct was lawful,” the motion states, referring to the Portsmouth officers who remained on-scene while protesters defaced the monument, but did not intervene for several hours until someone was injured.

Police had secured warrants for the accused by sending Sgt. Kevin McGee to Portsmouth Magistrate Mandy Owens rather than providing Portsmouth Commonwealth Attorney Stephanie Morales with complete investigative results, acting on their belief that Morales could be called as a witness in the pending cases. A Richmond-based judge struck down that argument in October, putting the decision to move forward with the prosecutions back into Morales’ hands.

“I did not recuse myself,” she confirmed to the paper, but did end up delegating the 19 separate cases to four deputy and assistant commonwealth’s attorneys in her office.

“The Portsmouth Police Department made a mockery of the criminal justice system by filing obscure felony charges against me and other Portsmouth citizens and in so doing; they created a scandalous national embarrassment for our city. Rogue police officers did an end run around the Commonwealth’s Attorney in an effort to bring down Black Leaders and Public Defenders. Everything that I have worked for all of my life was on the line with those bogus charges. It is obvious that everyone involved in that malicious investigation was determined to destroy me politically, professionally, and  personally. Perspectively, I stood to lose my voting rights, my position in the Senate of Virginia (where I am the first Black Legislator and the first woman to serve as Senate President Pro Temp) and my business license which would have cut off my livelihood. In their zeal to silence me and other members of the Portsmouth 19 plus one, they operated in secrecy from the city manager and city attorney and made multiple errors in their ill fated efforts to criminalize the justice system against us.”

While Lucas and the Portsmouth 19, a reference to the 19 individuals charged, were awaiting the judge’s ruling on the motion to dismiss, Chief Greene, who had been on paid administrative leave since September, was in Portsmouth’s City Hall learning her own fate. She had been fired, effective immediately.

After taking a few minutes to greet and hug her supporters, who had gathered outside City Hall, Greene held a press conference, announcing her intention to file a wrongful termination lawsuit against the city. She maintains she did nothing wrong and blames “political leaders interfering with the sworn duties of law enforcement officers,” for her termination.

Lucas’ daughter, Lisa Lucas-Burke, was also recently exonerated. After calling for Chief Greene’s firing in August, Portsmouth resident Thomas DuBois filed a complaint against her that resulted in two misdemeanor charges under a section of Portsmouth’s City Code prohibiting City Council members from directing or requesting any employee of the city manager be appointed or removed from his or her position. A judge dismissed those charges Oct. 13.