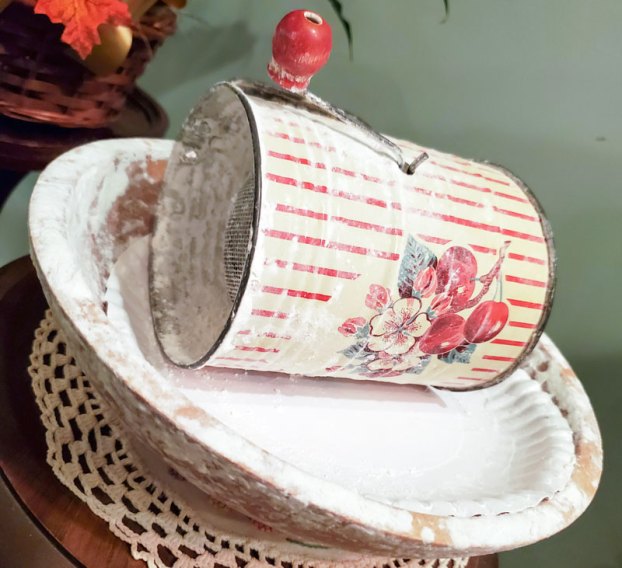 The biscuit bowl, including sifter and flour, which "Miss Betty" used in her long and full life to make biscuits for other people. The kitchen tools were placed beside her casket when people came for the visitation. -- Submitted Charles Qualls

As you read this, my wife and I are newly returned from a working trip down to her childhood home. She grew up in a small, middle Georgia town that basically sits on the Alabama border. It’s a tiny railroad outpost, only a fraction the size of Franklin. On its surface, we have a number of tasks to get done. At a deeper glance, though, this is a journey of the heart.

“Miss Betty” died recently. Elizabeth’s mother was always our healthy parent compared with the other three. Even as she crested 90 years young, we observed that she still had more energy than many people ⅓ her age. In a twist of irony that only 2020 could bring, she succumbed rather suddenly to a cascade of physical issues that even she didn’t know were there.

We got only a few days’ warning that things were going south with her health. However, visitors were not allowed in her hospital because of the threat of the virus. We made the difficult decision to start her on comfort care from the distance of a phone call. On the drive toward where she was, I told Elizabeth my role would be that of husband rather than of pastor. I would be a family member in this, and trust that the wonderful clergy down there would serve us well. That, they did.

In late September, with a full-blown COVID reality in mind, we gathered outdoors in a beautiful garden memorial service to celebrate her life. I suppose one of the most vivid markers of a life well-lived is that at least 75 people turned out in a pandemic. They stood on a warm day, masked and at least 6 feet apart, as two beloved pastors led us all in tribute and hope.

But the bowl is probably what you should know about. In the brief window of time when we thought she would actually recover, we worked inside Betty’s home. The house Elizabeth grew up in. For parts of four days, we cleaned and organized. We were readying it for her return. That’s when we first came upon the wooden mixing bowl, covered in flour with a crank sifter inside it.

Mere days later, we were at the funeral home and making arrangements. The director asked if there was anything that symbolized her life that ought to be there, other than pictures. Elizabeth chuckled and said, “That biscuit bowl is the most symbolic thing she had. It ought to sit here next to her casket as people come to visit!” Then, she interrupted her own thought with, “Nah … that’s probably not right.” That’s when the funeral director, who’d known Betty for decades, smiled. We exchanged glances and I said, “Honey, why not?”

All the next day, as people stopped in to pay their respects, an ornate wooden plant stand held the mixing bowl, still covered with flour and with the sifter sitting inside it. When we gathered in the church garden for the service, the bowl and sifter sat just off the corner of the podium. Why?

For most of her adult life, Betty was known for her biscuits. It wasn’t so much the taste or texture of her biscuits, although they certainly were good. No, it was that they were a gift. If you had a birthday, any old birthday, you might receive a pan of biscuits. Or at least a large one with a candle in it. If you were sick or had surgery, you’d better believe you were going to get a pan of scratch-made biscuits. If you were celebrating or mourning something, you were sure to be accompanied by the gift of biscuits. Steady as time itself, Betty’s biscuits were her calling card. They communicated her love, and spoke of one’s place in her life.

Miss Betty was never famous, although locally the folks of Manchester might argue that point. Seems that everyone knew her, everyone loved her and they admired her quiet and steady way. It was a humble life well lived. Hers was a warm heart and an open mind, all best symbolized by a decades-worn and flour-saturated wooden bowl. I wonder if I do anything that lets others know they are important to me? Seems like our world could use all the figurative biscuits that any of us could bake. By the way, the answer is yes. We did bring the bowl back here with us.