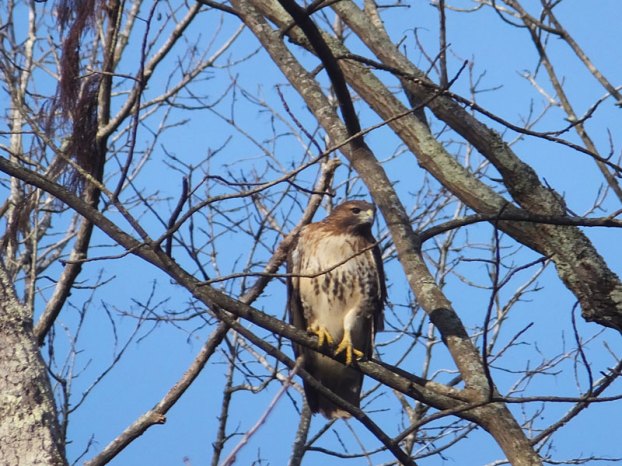 This hawk seemed curious about Moonpie, the RiverGuard's canine companion, during a trip on the Blackwater River. -- Submitted Jeff Turner

Spirit of Moonpie and I spent the 9th through the 11th (my Bday) on the Blackwater below Franklin. The water was 41 degrees, a little colored and fast. Air temps ranged from 28 to 60 degrees. It was a tad chilly that first day only reaching 48 degrees. Except for the boatload of trash I picked up I did not see any water quality issues.

I did not fish much on this trip. I spent most of my time cleaning up the river and just idling around thinking. I did catch a few very small speckle in Georges Bend but that was it. Just didn’t much feel like fishing, didn’t need any either, the freezer at home has plenty in it.

So yeah, I spent most of two days picking up trash, and lots of it. Nearly all from the Franklin Stormwater Canal that funnels all that garbage into the river. I picked up balls and all kinds of toys. A trash bag full of Styrofoam cups and food containers. Where do the people that eat from these portable environmental cysts sit at to eat? On the banks of the city stormwater ditches?

And of course there were the dozens and dozens of water bottles. I also removed two coolers from the river, most likely from the same source. I don’t know if a boat capsized out there or they washed off of someone’s pier or what. One of them was custom-painted with such vulgar language on it I cannot put it in print. You can go on the Blackwater Nottoway RiverGuard Facebook page though and see the pics. I hope that cooler did not come from a boat on the river. I spend enough of my time cleaning up trash from humans, I damn sure don’t want to have to start cleaning up humans that are trash on the two rivers we call the Blackwater and Nottoway.

By Jo Weaver Master Naturalist When I first saw the land for which I would become caretaker, it was without... read more