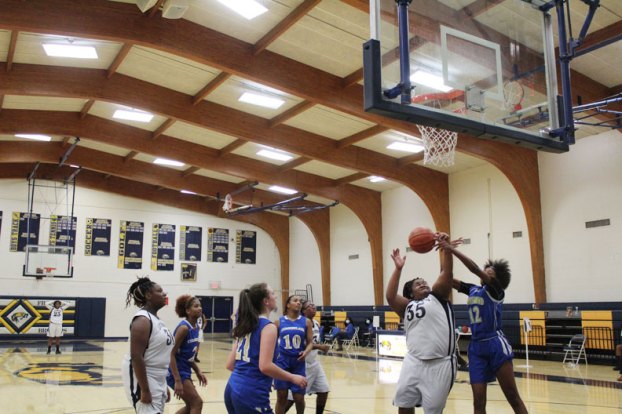 At far right, Kaliyah Braxton of Cumberland tries to get the ball away from Lady Bronco Mia Ricks of Franklin High School during Monday night's game at FHS. -- Stephen H. Cowles | The Tidewater News 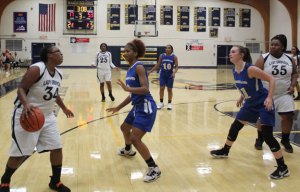 Janaia Trent and Allie Hurt are ready to intercept wherever Ja’Carra Whitehead is looking to pass the ball. In back, left to right, are Ariana Picot, Nalonda Henderson and Mia Ricks. — Stephen H. Cowles | The Tidewater News

Monday’s basketball game at Franklin High School (FHS) was the first in the season for both the Lady Broncos and visiting Lady Dukes of Cumberland High School. The latter went to overwhelm the hostesses, 61-17.

The chances for the Lady Broncos were still promising when they trailed by only 10 points (15-26) by halftime.

Coach Dennis Sumblin for FHS said at that time, “We’re doing OK. We’re young. We have three freshmen, three sophomores and two returning seniors. I’m impressed with what we have.”

John Trent, coach for the Cumberland, said then there had been “a whole lot of turnover [in the team]. We need to protect the ball better and move around and I think we’ll be OK.”

Many times during the game the hosts got the ball to the basket, but couldn’t sink it in either for aim or interference. Their only other gain happened during the third quarter and put them at 17 points.

In the second half, the Lady Dukes seized every opportunity to grab and control the ball in their favor. They were at 45-17 by the end of the third quarter, and then went on to achieve their victory at the final buzzer.

The teams will meet again when Franklin goes to Cumberland on Jan. 29. Meanwhile, the Lady Broncos will play in Mathews this Friday.

As of Dec. 30, Franklin High School is still on track to have winter sports. The following schedules are subject... read more