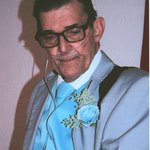 He was born on April 9, 1948, in Birmingham, Alabama, to Elgin O’Neal Thomas Sr. and Rowe Poynter Thomas.

He served in Civilian Air Patrol in his youth and attended Samford University in Birmingham. He served his country in the U.S. Navy for 26 years until retirement. Following his retirement from the Navy, he worked for International Paper Company in Franklin until retirement. He was a member of the American Legion. He loved music, especially listening to his wife play the organ. Whatever he was doing, he would always stop and go into the living room and sit whenever she began playing.

He enjoyed model trains and electronics. He was a big NASCAR fan.

Elgin had been a Florida resident for nine years, formerly living in Virginia. He was of Presbyterian faith.

He was preceded in death by his parents.

Visitation will be held in Stephenson-Nelson Funeral Home on Thursday, Jan. 14, at 11 a.m. Services will follow at noon. Services will be by Pastor Maureen V. Baker and music by Jaquae Sands.

Memorial contributions may be made to the American Society for the Prevention of Cruelty to Animals.

Online condolences may be left at: www.stephensonnelsonfh.com.