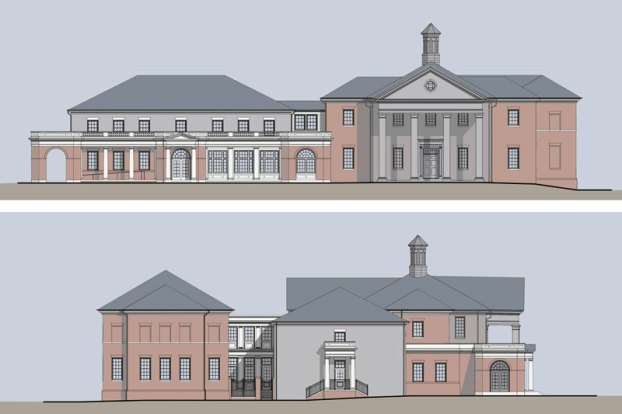 A rendering of the proposed courthouse additions and renovations by Glavé & Holmes. Courtesy | City of Franklin

Franklin’s City Council is contemplating a 5-cent real estate tax increase to fund its share of the Southampton County Courthouse renovation, which is set to break ground in September.

Per the latest estimate from the county’s project architect, Glavé & Holmes, the work will cost just over $15 million. The city of Franklin will be on the hook for just over 21% ($3.4 million) of that figure based on its population of 8,261 to the county’s 17,855 and the precise amount of square footage it will share with the county.

According to representatives of the city’s financial advising firm, Davenport & Company, the tax increase could be phased in, starting with a 1-cent increase in fiscal year 2023, another penny in 2024 and the remaining 3 cents in 2025. Currently, the city’s real estate rate is $1.03 per $100 in assessed value.

The proposed debt will also fund the purchase of a new excavator at $288,080; new leaf loader truck at $250,000; repairs to the city’s public works garage and health department at $66,800 and $125,127, respectively; bathroom facilities at Barrett’s Landing Park at a yet-unknown cost; and $368,000 to purchase the Franklin Redevelopment and Housing Authority office at 100 Fourth Ave. for use by the city’s Social Services Department.

The current social services building at 306 N. Main St. had mold issues in 2016 and 2018, and, according to City Manager Amanda Jarratt, continues to experience serious maintenance issues — particularly with its basement.

“It is in the long-term interest of the City of Franklin to make this investment,” she said.

As for where the FRHA would relocate, Interim Executive Director Gwen Blue was unable to be reached by press time and Drew Page, chairman of the FRHA’s Board of Commissioners, said he was “not prepared to give a comment” on the matter at this time.

Isle of Wight County Schools will continue to provide paid leave for employees who are absent due to COVID-related issues.... read more