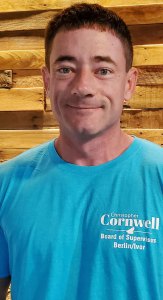 My name is Christopher D. Cornwell Sr. As a resident of our great Commonwealth and as a husband, son, parent and fellow elected official, I implore you to put politics aside and ask yourself some common sense questions regarding gun control. Are the proposed Constitution-violating, legislative oversteps genuinely going to accomplish anything to further protect the law-abiding citizens of our Commonwealth, or will they inadvertently create a greater risk to those they were intended to protect?

In looking at the facts I believe the latter of these to be true. These citizens are not the individuals responsible for the senseless acts of violence toward our fellow man, rather that responsibility lies solely on those with blatant disregard for the law and the sanctity of human life. The deprivations within our struggling mental health system are where the prevalent problems exist, and where such efforts and subsequent fiscal embrace to remedy this societal deficiency should take place. Cain killed Abel with a rock, it’s not the gun creating the problem, it’s the man behind the trigger.

Those citizens legally obtaining and responsibly owning firearms have a right to defend themselves, their families and those others among us that are unable to adequately defend themselves. The creation of such arduous laws creates victims rather than the intended goal of protecting. How is my wife to protect herself against a male perpetrator twice her size who intends to inflict harm on her or my children? Being able to lawfully possess a firearm levels the playing field enabling those that would otherwise be rendered defenseless the opportunity to effectively fight back. As currently proposed, the legislative verbiage is such that the possession of virtually any firearm utilized for this purpose would be deemed illegal, creating felons out of countless responsible Virginians, instantly overnight. Why would anyone want to remove this option for our Commonwealth’s most vulnerable citizens as a possibility to alleviate becoming a victim?

The overwhelming majority of our Commonwealth’s citizens do not advocate for greater restrictions of their rights, further jeopardizing their own health and welfare as well as that of their family. The best way to stop a bad guy with a gun is a good guy with a gun, period. With lengthy responses oftentimes surpassing the capabilities of our law enforcement officers to facilitate a timely arrival and provide a viable resolution to deescalate the problem further exemplifies the necessity for our citizens to be responsibly capable of protecting themselves. I embolden you further without delay to denounce these poorly written, dangerously irresponsible legislative proposals.

I make myself available to assist in any way possible to effectively mitigate this societal problem we all face together and to effectively promulgate a common-sense remedy that will actually yield desirable outcomes. I eagerly anticipate your response. Have a great day.

CHRISTOPHER D. CORNWELL SR. is a member of the Southampton County Board of Supervisors. Contact him at cornwell@southamptoncounty.org.

An essay on freedom

By Ash Cutchin Two years ago I had a discussion with an old friend (since high school) about a letter... read more