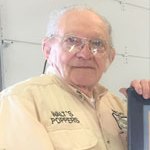 Walt served our country for 30 years, beginning his career in the United States Army, where he worked on the front lines in the Korean conflict as a forward observer. When he learned that the Army was planning to send him back to Korea, he enlisted in the United States Navy. Of all his duty stations, he was proudest of the time he spent as the command master chief petty officer on the USS Forrestal. As the highest-ranking enlisted man on the ship, he was responsible for more than 5,000 men.

Known among fly-anglers as Virginia’s Popping Bug King, Walt began crafting popping bugs for himself in the late 1950s to fish on Virginia’s Back Bay. Before long, others wanted to know his secret on-the-water weapon and Walt’s Custom Tackle was born. At its height, his company would supply as many as 12,000 poppers in a single year — all tied by Walt himself — to stores across the country. A regular speaker at fly-fishing shows across the Mid-Atlantic, Walt’s creative patterns once graced the cover of the venerable Fly Tyer Magazine. Among many accolades he won over the course of his fly- tying career, two stand out: The 13th annual Virginia Fly Fishing and Wine Festival honored Walt Cary as Virginia Fly Tyer of the Year in 2007 and the Fly Fishing Museum of the Southern Appalachians inducted him into their Hall of Fame in 2016.

A member of the Sgt. Jayton D. Patterson Veterans of Foreign Wars Post 4411 in Franklin, Walt was also a featured speaker at their annual Veterans Day ceremony.

Aside from his parents, Walt was preceded in death by a sister, Patricia Hancock (Russell) and two wives. He leaves behind a brother, Paul Franklin Cary of Maurertown, Virginia.; a sister, Polly Wilson (Richard) of Strasburg, Virginia; a daughter, April Pittman (Bill), as well as two grandchildren William Cary Pittman, Victoria Fox Pittman-Jones (Andrew) and two great-grandchildren, all of Courtland.

His funeral will be held in Arlington National Cemetery at a later date.

In lieu of flowers, the family suggests donations be made to Casting for Recovery at castingforrecovery.org or 109 E. Oak St., Ste. 1G, Bozeman MT 59715.