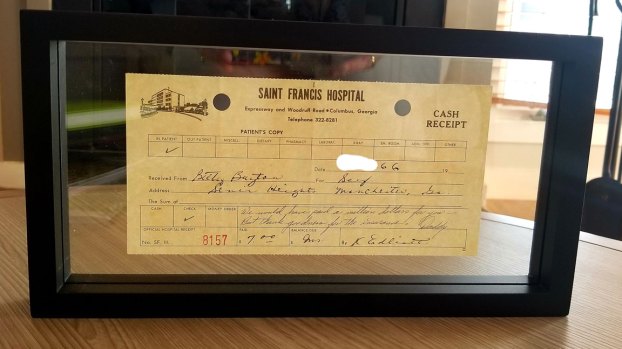 The comment reads, "We would have paid a million dollars for you — but thank goodness for that insurance!" - Daddy -- Submitted Charles Qualls

We’d have paid a million dollars

My wife had some estate business down in Georgia to settle. I went with her, since the drive is 10 hours. We haven’t traveled to speak of during the COVID era. So it was a quick little getaway to handle some things we couldn’t do electronically. It was a refreshing trip for us, even if it was more purposeful than vacation travel would be.

We did get to see her lifelong neighbor while we were at the house. Over 60 years ago, three young couples bought property on a hilltop and built houses across from and next to each other. Until only a few months ago, the widows lived on together after saying goodbye to their beloved husbands. Now, one has moved and one is gone. It was a treat to see “aunt” Sandra one more time.

We had to book a place to stay nearby to her hometown, since the house is empty now and under contract. We went by to pick up some last things. That was hard. There were some other stark things for my wife to deal with that lend finality to her parents’ deaths. At the cemetery, we met with the headstone man because in photos it appeared some of the placement was off. Turns out, everything was fine. But there were both of their names and dates on the stone now. Two lifetimes summed up, there at least, by basic information.

On reflection, though, it was a good and important trip. As always, you try to learn something from the journey. This adventure was no exception. In the midst of all the business that had to be uniquely addressed by my wife, I was listening and watching. I think we learned a few things.

First, I was reminded of the inevitability of change. We all know that change is a part of life. I also realize that most of us are wired to be pretty change-resistant. Part of Elizabeth’s sadness while there was knowing that her hometown would never be the same for her. A significant layer of family and meaning has faded now. We didn’t get a vote in that. Lifespans bring about that inevitability without any input from us.

Also, I was reminded that “treasures” are not defined by their cost, and that little things can mean an awful lot. For over 30 years, I had heard her parents say that when she was born, my wife only cost them $7. We had laughed about that many times, and they had speculated that somewhere they probably still had the hospital receipt to prove it. As she sorted through a few last belongings we removed from the house, she came across a small rectangular piece of paper.

Its basic logo and layout grabbed our eyes immediately. Sure enough, there was the receipt showing that her parents had effectively put down a co-pay of $7 when she was born. Even better, her father had hand-written onto the receipt the following: “We would have paid a million dollars for you — but thank goodness for that insurance!” The receipt now resides in a frame and will adorn our home. A symbol of not only her life’s beginning, but with her father’s words and hand-writing to see anytime we want to.

As we got into the car to head back to Franklin, we found ourselves talking about how long it would take us to get “home.” A couple of hours later, we speculated what we had in the refrigerator for dinner once we got “home.” About two hours from Franklin, we began to map out a quick plan for what we would unload when we got “home,” versus what we could risk leaving in the car overnight. Departing the state in which we both were raised, and especially the town of her birth, all our talk was about getting home. I was reminded once again that for us wherever we are, there “home” is.

These are important things. In the marvelous Harry Potter stories, the lead character discovers “The Mirror of Erised.” Quite simply, Erised is the word “desire” spelled backward. The mirror showed whomever gazed into it the deepest desires of their heart. One boy saw his family, whom he had never met, surrounding him. Another saw himself in a sports uniform as a champion he had never been. The wise old Albus Dumbledore explained, “The perfectly content man would look into the mirror and see only himself as he is.” May we navigate change and loss, and find ourselves still content on balance.