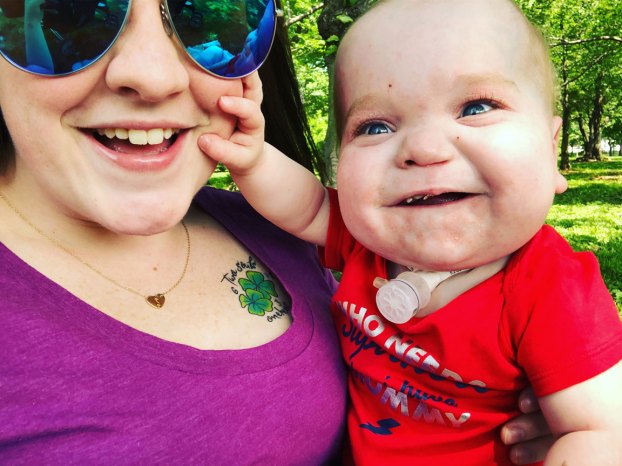 Mended Little Hearts supports families one beat at a time

Crystal McCullough and her daughter, Miranda, at a “Rock the Beat” 5K fundraiser for the Mended Little Hearts chapter. Both mother and daughter have congenital heart defects. Submitted

The birth of a child is a joyous occasion, but for those whose children are born with congenital heart defects, that day is also fearful.

“When he was born, all of that was overwhelming and affected our lives and just changed everything,” said Danielle Hill, mother to David, who passed away in July 2020 at age 15 from a congenital heart defect known as hypoplastic left heart syndrome.

Congenital heart defects are abnormalities that occur early in fetal development, usually before a mother is even aware she is pregnant, and which affect the structure and function of an infant’s heart. According to the Centers for Disease Control, 1 in 110 babies is born with a congenital heart defect in the United States — 25% of them are classified as critical. These children require surgeries and other procedures within the first year of their life.

The pain that accompanies hearing that your baby is critically ill is unimaginable, but for families in the Hampton Roads area, the members of Mended Little Hearts of Coastal Virginia are there to offer support every step of the way. Starting from the beginning, this organization provides bravery bags to newly diagnosed parents containing a comprehensive guide on comprehensive heart defects for parents, baby blankets and binkies.

These bags are just the start of the resources provided by Mended Little Hearts. The group holds private support groups for caregivers of children with congenital heart defects, hosts free events and outings for the heart warriors, holds educational meetings to help parents become more informed about their children’s conditions, provides self-care nights for caregivers, and much more. Mended Little Hearts offers a voice for the voiceless through collaborating with the doctors and staff at the heart center at Children’s Hospital of the King’s Daughters every January to provide center updates and advocating for healthcare for those with preexisting conditions on Capitol Hill. The group educates the public and medical professionals about congenital heart defects, including holding seminars at local hospitals’ maternity wards to teach the importance of pulse oximeters, devices used to assist in the identification of heart defects in newborn babies.

For members like Hill, Mended Little Hearts has played a major role in their lives and has helped them through even the most difficult times.

“It’s been a huge support for my family,” said Hill. “I never felt alone every time my son was in the hospital; anytime something happened they were always there just to reach out and see what we needed at the time.”

Before he died, Hill’s son, David, was in the hospital for two months, and he was released just five days before Christmas. Two members from the group arranged to have Christmas presents delivered for all of Hill’s children to ensure they still had a magical holiday despite everything they were going through.

“I was not expecting that,” said Hill. “That was really nice to come home to.”

Mended Little Hearts never stops supporting their members, no matter how difficult the situation is. Hill had a private funeral only for family for David, but when she walked in the church auditorium there were yellow balloons, David’s favorite color, tied to every single chair.

“They had a note from each family, each person, on each of the balloons,” said Hill. “There were a ton of balloons, a ton of notes. I could not believe that; it was very overwhelming how much they cared about our family and David.”

Hill is just one of many people in Hampton Roads who has been impacted by the love and kindness that embodies Mended Little Hearts of Coastal Virginia. With more than 200 members encompassing parents and grandparents, caregivers and other members of families’ support groups the organization has grown exponentially since becoming chartered in May of 2017. The organization is a chapter of the national organization and was started by current lead coordinator Crystal McCullough after her son, Logan, passed away from Tetralogy of Fallot, a combination of four congenital abnormalities, at 4 months old in January 2017. A congenital heart defect survivor herself, McCullough and her husband realized the families of Hampton Roads needed more support.

“Me and my husband looked at each other and we were like, we’ve got to do something more for all of these families around here, this is crazy.”

McCullough and the families who were a part of the loosely organized support group at CHKD, originally “Healing Hearts,” chose to join Mended Little Hearts, which McCullough had previously experienced the effect of during her son’s hospital stay.

“I was in the hospital at UVA in Charlottesville and them handing me that bravery bag with the resources all in one spot to say, ‘I’m not alone’ and this is where you should start … was so helpful in me being not overwhelmed,” said McCullough.

The coastal Virginia group continues to ensure families are never alone, hosting multiple events to offer fun times for the children and caregivers who are more than deserving of a celebration. Every fall they have a fall festival at Hunt Club Farm. In February, which is Congenital Heart Defect Awareness Month, they hold a sweetheart dance; in May they go to the zoo; in July, CHKD sponsors them to go to a Tides game; every Christmas they have a party with Santa; Thanksgiving is celebrated with a potluck and “Rock the Beat 5K” to raise money for the organization.

“It’s really helped a lot of us through every season of life,” said McCullough. “Even those of us who have lost our children, we’re still in the group. We’re still here to help.”

The group is not restricted to kids and parents, but is also open to teens and young adults with heart defects. Many children with congenital heart defects are becoming adults thanks to medical advances; however, health care is not necessarily prepared to handle their complex care. For example, in Hampton Roads there are only two board certified adult congenital heart defect doctors. According to a study published in “Circulation” in 2016, It was estimated that about 1.4 million adults were living with congenital heart defects in 2010 in the United States. Mended Little Hearts is working hard to bridge this gap in care for their members while supporting them emotionally as well. The older members such as McCullough are able to relate to those younger who have similar defects.

“There is the emotional piece as well. You’re different; you have a scar,” said McCullough. “We’re taking care of the mental, the emotional need and it’s kind of nice because then as older adults we are helping the younger generation.”

Besides supporting their own members, Mended Little Hearts also gives back to others whose children are battling different diseases. Every other month, the group gets together and makes dinner for the Ronald McDonald House in downtown Norfolk for families whose children are staying at CHKD. Due to COVID-19, they have been unable to take part in this tradition as well as all of their other events this year, but they continue to help by making donations to the house.

The group continues to support each other as well despite being unable to meet in person. There is a main Facebook page, “Mended Little Hearts of Coastal Virginia,” for the organization open to anyone, but the families share updates and information to one another through a private support group page. They have plans for the future post-pandemic, including a mother/father/caregiver evening and more.

For McCullough, this is not only an outlet to offer resources and her own personal experience to families for support, but also a way to honor her son.

“We were able to carry Logan’s love forward by doing this,” said McCullough.

Ashleigh Jordan, whose son, Weston, passed away at 3.5 years old after complications related to hypoplastic left heart syndrome, recalls how Mended Little Hearts has helped her throughout hospital stays and even after the passing of her son. She told her story while holding back tears and viewing a photo on her desk of the first time she held her son.

Mended Little Hearts sent cookies to Jordan while Weston was in the hospital and delivered a box to her after her son’s funeral.

“They are always there,” said Jordan.

The members of MLH of Coastal Virginia realize how precious every second and every heartbeat is. They have survived darker days than most could imagine even lifting the page to look at the pictures of. Despite it all, this incredibly strong group of people are making the most of this life. They are building relationships through the bonding of caregivers, advocating for their children, and enjoying every good day they are given. They are there for each other to celebrate every milestone, such as first birthdays and homecomings from the hospital, and they lift one another up when they are unable to stand alone.

It’s a club they didn’t want to have to join, but one they are happy to have found when they need it.

“I don’t know where I would be without them,” said Hill. “It’s the best group I’ve been in.”

These families are strong because they have to be, but when the time comes that they need support they know the members of Mended Little Hearts of Coastal Virginia will always be there.

“Being able to be a part of this group really opens up your eyes to what matters and what doesn’t matter in life and [seeing] how amazingly upbeat, happy and positive these kids are despite all they go through,” said McCullough. “It kind of puts things into perspective.”

We’d have paid a million dollars

By Charles Qualls My wife had some estate business down in Georgia to settle. I went with her, since the... read more