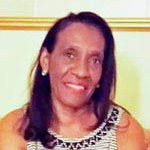 Albetty began her teaching career in Norfolk, specializing in early childhood education. Subsequently, she moved and settled in Newark with relatives. She started her family, got married and raised her children in New Jersey. Bush was employed with the Irvington Board of Education until she retired in July 2011. She was a member at First Baptist of Lincoln Gardens in Somerset and served in the Usher Ministry. In 2017, Albetty returned to Franklin to care for her mother until her mother’s demise in January 2020. In September 2020, she learned of the rare illness that led to her transition.

A viewing will be held on Tuesday, April 27 from 5 p.m. to 7 p.m. at Evans Gordon Funeral Home in Newark, New Jersey.

A private celebration of life will be held on Wednesday, April 28, at 10 a.m. in First Baptist Church of Lincoln Gardens. You are welcome to join livestream: fbcsomerset.com. The interment will be in Graceland Memorial Park, Kenilworth, New Jersey. Information submitted by Wm. M. Johnson & Sons Funeral Home Inc.