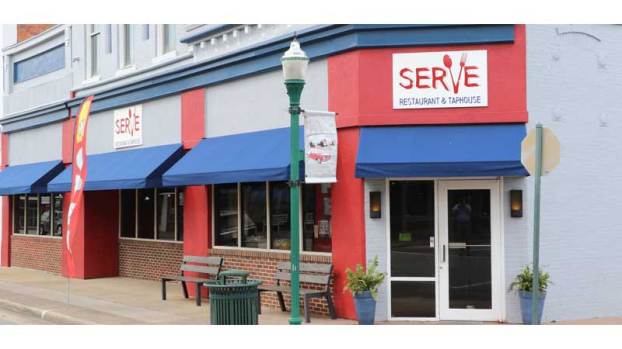 Serve Restaurant and Taphouse, located at 102 N. Main St. in Franklin, was recognized in a category for businesses that are less than 3 years old as a “Top to Watch” business by the Hampton Roads Chamber of Commerce. (Photo by Titus Mohler)

Serve Restaurant and Taphouse was honored by the Hampton Roads Chamber of Commerce and the Small Business Development Center of Hampton Roads as a “Top to Watch” business in a category of businesses that are less than 3 years old.

The recognition took place at an awards luncheon held May 20 at the Chesapeake Conference Center.

“It was a huge honor just for our team to get recognized for everything that’s kind of happened over the past year,” Serve Restaurant Head Chef Nic Hagen said. “Opening a business in a very small town in the middle of a worldwide pandemic and actually thriving through it was amazing.”

“We did pretty much Wednesday, Thursday, Friday, Saturday, we closed on Sunday, and then they had restrictions and all, the shutdowns and everything, started on Monday,” Gardner said. “The first week I don’t think we had anybody in here. Then they started opening up a little bit to where we could do takeout. It was just me and Nic and one server in here, and that was pretty much it for a while.”

Hagen said the business opened up and then had to cut staff as the COVID-19 pandemic hit.

“The staff that’s stayed with us — the core that’s still there — just put in lots of hours and worked to build something for the community to now have,” he said.

“We’ve put in a lot of hard work over the last year, and it felt really good to have some recognition in the little town of Franklin,” Gardner said. “To put in the hours I know me and Nic have put in — Nic’s probably put in a little more than I have — it feels good, it feels really good.”

Serve benefited from the familiarity some had with Hagen.

“Some investors called me to come home,” Hagen said. “They knew my past. I had a restaurant in Portsmouth. I actually helped open The Back Porch (& Grille) there in Franklin. My dad owned the bowling center for 13 years.”

Hagen said he thinks what helped Serve earn the “Top to Watch” honor was its ability to adapt to the changing business environment created by the pandemic.

“We opened up to be full dining, and four days later I had to go to partial dining, and then a few days after that, I went to takeout only,” he said. “We’ve doubled in the last little bit, and it’s hard to keep up, but people seem to not have a problem waiting or learning how to adapt with the changing times every day.”

Gardner said Serve and its staff hope to get the Business of the Year award in the future.

“We’re still hungry,” he said. “We’re expanding, actually, in the next couple months. We’re building a catering kitchen, and we’ll have a private dining room.”

Hagen said, “We’re hoping by September to be able to do some more catering and things.”

Gardner said it has been gratifying to see the progression and the evolution of the business over the past year, and it was an honor for it to be recognized by the Hampton Roads Chamber of Commerce.

“We’re really happy, and we’re right back to work, though,” he said. “Keep pushing and keep putting in the hours. We just have fun when we come to work, and we don’t really care about what anybody else is doing, we’re just doing what we do, and we have fun and enjoy what we do, and we hope that shows in our food and when you come in here to eat.”

Monument expected to be moved in mid-June