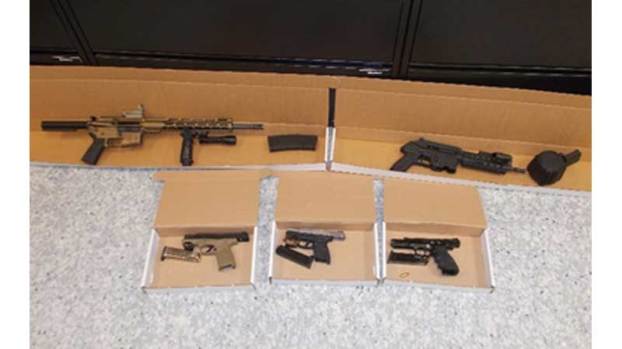 Pictured are the weapons recovered by police from off the ground June 6 after a tip by an anonymous citizen brought officers to Bruce Street where some suspicious subjects were allegedly seen with weapons. (Photo submitted by Franklin Police Department)

A tip from an anonymous citizen led to the recovery of weapons by police and possibly thwarted a shooting in Franklin on June 6.

The Franklin Police Department reported June 7 on its Facebook page that on June 6 at approximately 11:06 p.m., an anonymous citizen contacted the department about several suspicious subjects with weapons hanging out around the playground at the Old Towne Apartments on Bruce Street.

Upon arrival the officers encountered several subjects who matched the description of those mentioned by the anonymous citizen, the social media post added. The subjects did not have any weapons in their possession at that time, and they left the area.

The department’s post continued by stating that the officers conducted a check of the area and discovered multiple firearms lying on the ground away from the area officers had originally encountered the subjects.

Further investigation is being completed and hopefully charges applied where authorized by law, the post stated.

Franklin Police Chief Steve Patterson noted in a June 8 interview that citizen engagement is important because the police can only do so much.

“The community is a force multiplier,” he said. “They are our eyes and ears when we are in other places handling other calls for service.”

Referencing the anonymous citizen with the June 6 tip, Patterson said, “This is a prime example of someone providing information anonymously that hopefully has led to the prevention of a shooting incident. We are thankful for this citizen and encourage others to do the same.”

The chief had participated in a community event called “Chilling with the Chief” on May 26 during which he was asked what the community can do to help the police.

“If you see something, say something,” he told them, encouraging people to share any leads or tips they may have with the police, because he noted that people will often not talk, even though they know details.

Jesse Evans, the community member who organized the event particularly to look for ways to stop gun violence in the city, pointed out during the event that there is a line of thinking present in the community that says, “I don’t want to be a snitch.”

“Well, guess what, some people don’t feel affected until it actually hits their house, then they want everybody to say something,” he said. “But that’s the wrong way to be. We all live in Franklin. Franklin is where we all live. Like the chief said, when you see something, say something. That’s the only way it’s going to get better.”

The U.S. has responded tremendously to the need for blood donations amid the COVID-19 pandemic, but the American Red Cross... read more