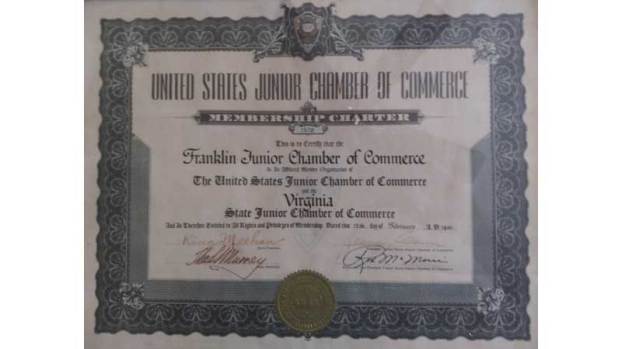 The award was presented during the Virginia Jaycees State Convention held at the John Marshall Hotel in Richmond in the ‘70s. (Submitted by Clyde Parker)

Franklin Jaycee Chapter No. 1 in Virginia

The Franklin Jaycee Chapter (organized in 1946 as the Junior Chamber of Commerce) has been chosen as the most outstanding Jaycee organization in the Commonwealth of Virginia for 1970-1971. The local chapter received the Giessenbier Memorial Trophy which recognizes the one Virginia Jaycee chapter, from among the 142 Jaycee chapters in Virginia, that conducts the most significant and comprehensive community service projects and carries out well-organized and balanced chapter programming.

The award was presented during the Virginia Jaycees State Convention held at the John Marshall Hotel in Richmond May 21-23. Earlier, judging, based on submitted project documentation, was done by a tri-state committee in Rock Hill, South Carolina. Franklin was in competition with chapters, both small and large, including those located in very large metropolitan areas like Virginia Beach, Richmond, Roanoke, Hampton, Norfolk, Fairfax and Northern Virginia. Five finalists were determined, based on community population ranges: Amelia, Franklin, Harrisonburg, Danville and Virginia Beach. Franklin prevailed over the others.

“We are proud of this honor and the fine community in which we live,” Richard Bowen, 1970-1971 president of the Franklin Jaycees, said as he received the award on behalf of the chapter’s 100 members – and the Franklin-Southampton community. “Through the efforts of every young man who has been a member of this organization during its existence and through the excellent support of the people of the Franklin-Southampton area, this achievement was reached.” Bowen was recognized as one of the top  chapter presidents in Virginia.

Clarence Puckett, the chapter’s state director, added, “Countless hours of hard work by hundreds of Franklin Jaycee members and their wives over the years went into winning this honor. I hope every Jaycee from 1946 to now feels a personal pride as I do. It’s absolutely fantastic!”

Clyde Parker, 1969-1970 Franklin Jaycee president, said, “To be selected as the most outstanding Jaycee chapter in the state is a most significant achievement. The Franklin chapter has earned the respect and admiration of Jaycees across the state. This recognition is not easy to come by – it is indicative of the community work done by the Franklin chapter. It is also indicative of the support by the fine people and businesses in Franklin-Southampton.”

Jim Wagenbach, of Franklin, Jaycees International Senator and former National Director of the United States Jaycees, was also in attendance.

Also attending the meeting, in conjunction with the Franklin delegation, were President Ray Crum and External Vice President Hobart Shields of the Southampton Farm Jaycees.

CLYDE PARKER is a retired human resources manager for the former Franklin Equipment Co. and a member of the Southampton County Historical Society. His email address is magnolia101@charter.net.

Off the bat, it’s important for me to say that as a rule, I do not watch movies starring or... read more