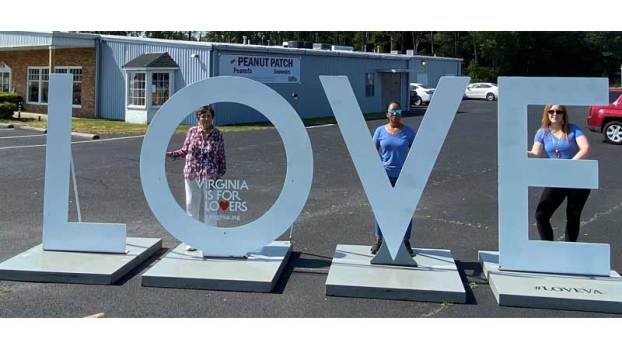 From left, The Peanut Patch Gift Shoppe Owner Judy Riddick, Manager Jeneen Dimick and Associate Amanda Holland pose with the Virginia Tourism Corporation’s life-sized LOVE sign that will be located outside the shop for photo opportunities until June 14. The sign is the focus of a couple contests. (Photo submitted by Jeneen Dimick)

The Peanut Patch Gift Shoppe is looking to highlight food and artwork that is from Virginia and some that is also local as the business hosts its annual Virginia Day Weekend from June 11-13.

The shop, located at 27478 Southampton Parkway in Courtland, reopened its building for business in April after it had been closed since August 2020 when a tornado hit it, causing significant damage.

The business had found other ways to operate while the building was closed for repair and renovation, but Peanut Patch Manager Jeneen Dimick described finally being able to operate out of the building again as awesome.

She said the shop’s 2021 Virginia Day Weekend is a special opportunity for people to see The Peanut Patch’s new direction, which features an emphasis on local- and Virginia-based food and artwork.

“This lets our customers know exactly what we’re all about,” she said. “We have the Virginia is for Lovers sign outside, so this gives people insight on buying local and buying from our state.”

As was announced in a press release, The Peanut Patch is hosting the Virginia Tourism Corporation’s life-sized LOVE artwork from May 24-June 14 as part of a state and local partnership to promote tourism in the commonwealth.

The release added that the artwork, which is 16 feet long and more than six feet high, is an extension of the 50-year-old Virginia is for Lovers brand, one of the most beloved and iconic slogans in the world.

Dimick explained what else those attending Virginia Day Weekend can expect, in addition to the shop’s consistent variety of food offerings and artistic pieces, the latter of which include handmade crafts, jewelry, paintings, candles, photography, clothing, pottery and more.

She said there will also be a tasting of Virginia wine.

“So we definitely want to show our customers the new direction that we’re going in with Virginia Day, and we’re celebrating all things Virginia,” she said.

The event will be both an indoor and outdoor one, she noted, with at least one vendor setting up outside The Peanut Patch building.

“We’re hoping that people are outside taking pictures with our Virginia LOVE sign, and we’ve got a couple contests going on along with our LOVE sign that’s on Facebook,” Dimick said, referring to www.facebook.com/ThePeanutPatchGiftShop.

The press release encouraged those who take a picture with the LOVE sign to not only post it on social media with #LOVEVA and #THEPEANUTPATCH but to also go inside the shop to show the picture to The Peanut Patch staff and receive a free bag of peanuts.

LOVEworks Hall of Fame,” officials stated in the release.