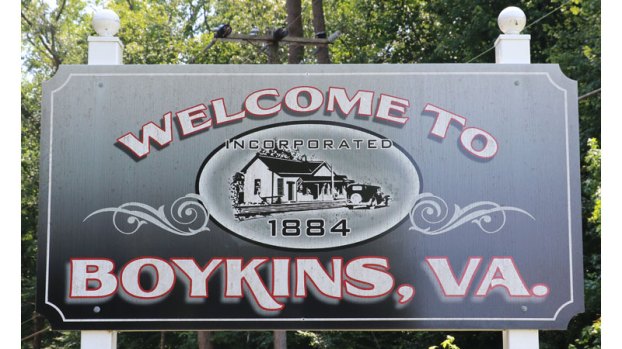 The new Boykins town entrance signs look like this sign already in place and visible when coming into the north side of town from Route 35 at the Beechwood Cemetery. (Photo by Titus Mohler)

Councilwoman Linda Beatty was absent from the June meeting, but the budget was approved unanimously by those members present, Edwards stated.

The clerk also noted that the town’s current insurance matter being reported on monthly is composed of the project updates on the new town shop. It was destroyed in a fire in May 2020. However, she said there were no significant updates at the time of the June meeting to report.

Edwards shared some details in connection with the Raymond Parker Park Report made during the council meeting.

“Our park developed some maintenance issues while closed due to COVID-19,” she stated. “We also lost equipment — namely basketball goals we removed while the park was closed — in the shop fire. We are slowly getting everything back to pre-COVID-19 condition.”

Discussion of town entrance signs was on the council’s agenda. Edwards indicated July 2 that new signs were on the way, though she said they would not be put up by July 5.

“However, they are the exact same as the sign already in place coming into the north side of town from (Route) 35 at the Beechwood Cemetery,” she stated. “Once these signs go up, all town entrance signs will be the same.”

The Beaton Avenue lot was on the Town Council’s June meeting agenda, but Edwards said there was no update on the issue.

Edwards described the issue in a previous article, noting there has been confusion as to who legally owns the small triangular lot next to the railroad right of way on Beaton Avenue.

“This first came to Town Council’s attention in April when Mayor Robertson was approached while cutting the grass on the lot by relatives of Mr. Antwon Person, who believes the lot was included in his purchase of the adjacent property in 2008,” Edwards stated in May. “The town and Mr. Person both have deeds they believe describe the lot. Unfortunately, both deeds are vague in description and do not give a complete legal description of the lot.”

“A surveyor has been out to survey the lot to help provide clarification,” Edwards said.

She noted the surveyor’s findings would be given to Commissioner of Revenue Amy Carr, who would make the appropriate corrections.

Lacking any update on the issue in June, it has been carried over to the Town Council’s July 13 meeting.