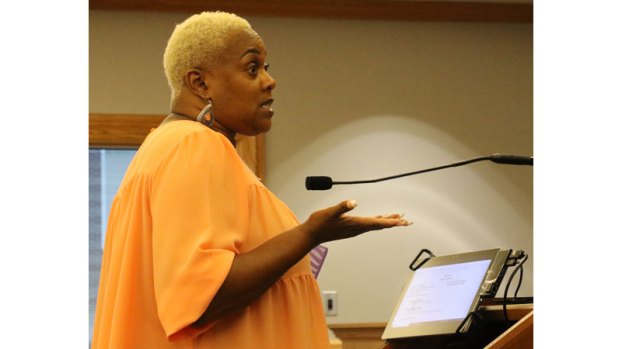 Lokette Wiggins Myrick speaks to the Franklin City Council on June 28, asking for its help in stopping the gun violence taking place on Dorchester Street. (Photo by Titus Mohler)

Franklin residents addressed the Franklin City Council in both of its June meetings, asking for its help in stopping gun violence that is happening within the city.

“We are in a situation where we are constantly riddled by gun violence,” Jesse Evans, of Washington Street, said during the June 14 council meeting. “Kids are unsafe, older people are unsafe, everyday citizens are unsafe to the point that you have some people that are actually considering putting their hard-earned home that they worked years to buy up for sale because we are riddled with gun violence.”

Evans noted that he hosted a community event May 26 at the Franklin Sportsman’s Association called “Chilling with the Chief” where citizens came out and shared their concerns with Franklin Police Chief Steve Patterson.

“A lot of good ideas were voiced at that meeting, and I think due to that meeting, because of the voices that were heard, the next day, a camera was put up on Bruce Street, and I applaud the city for that effort,” Evans told the council.

Cameras were highlighted by citizens during the community event as effective deterrents to gun violence.

“However, there’s still a lot of troubled areas on Cobbtown,” Evans said to council members. “I urge those council persons that are in charge of those wards to reach out to your constituents and hear their concerns. They have genuine concerns, and this gun violence is getting worse, and they want something done.

“We know that some things are going to cost money,” he continued. “We understand that. But we are asking you to at least make an effort to show that you have a concern to an end to this gun violence.”

He suggested installing community precincts in each community that is considered a high volume area, listing Dorchester, Bruce Street and Berkley.

“Those places we feel like could be a place where you could set up a community precinct,” he said. “In other words a presence sometimes will deter an action.”

He then reiterated his point to council members that they go into their communities and listen to people’s concerns.

Franklin Mayor Frank M. Rabil told Evans the city would follow back up with him.

During the June 28 City Council meeting, Lokette Wiggins Myrick, of Dorchester Street, said, “I’m coming because there’s a problem with gun shooting out there.”

She said she has been knocking on doors and talking with people, getting signatures to gather support before the council to call for action.

“After all the people I’ve talked with and spoken with and some of the mothers of young kids, they’re concerned about the gun shooting, as well as myself, because I’m a little too heavy to keep jumping off the bed and getting on the floor because I don’t know where the bullets are going,” she said. “Is there any way that we can get cameras put up there along the street? Then they don’t just shoot.

“The people that are doing these shootings, they don’t even live there. And they constantly drive down the street like it’s a raceway.”

She said if she needs to go and knock on more doors to get more signatures from people, then she will.

“I let them know what I was doing and what needed to get done, and they agreed with me, and I also let them know that they did not have to come, because a lot of them are concerned about people knowing who they are,” she said. “Me, I don’t scare easily.”

Rabil thanked her for her comments.

“We will make sure that the city manager and the police chief as well as our fire chief get all that information, and they’ll be in touch with you,” he said.

The Boykins Town Council approved during its June meeting a $259,672 fiscal year 2021-22 town budget featuring no changes in... read more