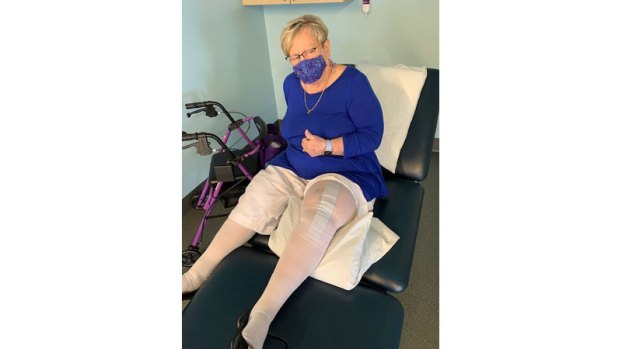 Pam Phillips, of Norfolk, went to Dr. Manish Patel for a “Jiffy Knee” replacement in 2019 after she fell and fractured her knee. She was able to return to work after five days and only spent six weeks in outpatient medical rehab. (Photo submitted by Bon Secours)

A July 13 Bon Secours news release continued by noting Patel has performed the operation more than 3,000 times since 2006, including 700 times in 2021 alone.

Traditional knee surgery requires doctors to cut tendons in and around the knee, causing intense amounts of pressure that most TKR patients experience.

Patel’s “Jiffy Knee” procedure, which received a federal trademark three years ago, does not cut any tendons or muscles and only leaves a small, faint scar on the surface. This method allows patients to move and get back to their regular lifestyles much more quickly and with much less pain.

According to Patel, 97% of “Jiffy Knee” patients go home the day of their operation and can walk upstairs within three hours.

“Patients who are experiencing knee pain should at least consider the ‘Jiffy Knee’ procedure before settling for a painful, traditional knee replacement,” Patel said in the release.

Pam Phillips, a resident of Norfolk and one of Patel’s former patients, went to him for a “Jiffy Knee” replacement in 2019 after she fell and fractured her knee. She was able to return to work after five days and spent only six weeks in outpatient medical rehab compared to the average of nearly 12 weeks in rehab following a traditional operation.

“For the first time in years, I feel like I have my life back,” Phillips said in the release. “At first, I couldn’t see the light at the end of the tunnel. I was afraid I wouldn’t lead a normal life again, but now I can and I am living a normal life again.”

Patel graduated from Drexel University in 2000 with a doctor of medicine. He participated in the Orthopedic Surgery Residency Program at Temple University from 2000 until 2005 and spent one year in a sports medicine fellowship at Mississippi Sports Medicine and Orthopedic Center. During this time, Patel enhanced his surgical skills and learned about soft tissue preservation techniques, ultimately leading to the creation of the “Jiffy Knee” procedure after he completed the program.